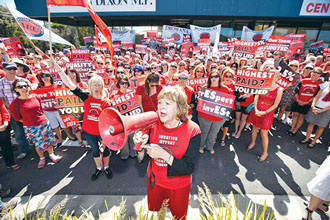 MORE than 300 teachers rallied outside the McCrae office of Education Minister and Nepean MP Martin Dixon on Wednesday.

The McCrae Plaza shopping centre car park was turned into a sea of red clothing and banners as teachers and support staff vented their disappointment at the standoff between the teachers’ union and the Baillieu government.

Australian Education Union members are targeting state government MPs as part of the “Keep the Promise” campaign, which refers to Premier Ted Baillieu’s claim made before the November 2010 election to make Victorian teachers “the best paid teachers in Australia”.

The morning rally was part of a series of statewide stoppage by teachers. Peninsula schools were either closed for the morning or the whole day

Australian Education Union president Mary Bluett (pictured) told teachers from more than 30 peninsula schools the log of claims had been with the government for two years.

“The government has our best offer; this fight is far from over,” she said to loud applause.

Ms Bluett said the union would highlight “the tremendous hours” worked by teachers. “Teachers work an average of 50 hours a week for 38 hours’ pay. You do the extra hours because of your commitment to your schools.”

Police in two riot vans and sedans arrived before the 10am rally and sealed off two sections of the car park.

Three officers stood guard outside Mr Dixon’s office, but allowed a giant letter to be handed to office staff.

Mr Dixon was not at his office as Parliament was in session.

Rallies across the state – including outside the office of embattled Frank­ston MP Geoff Shaw at the same time on Wednesday – aim to keep pressure on the government to restart negotiations with teachers, who are pushing for a 30 per cent increase over three years and fewer short-term contracts.

The government is offering a 2.5 per cent annual rise and talking about extra increases after “productivity gains”.

Ms Bluett said the “broken promise will leave Victorian teachers among the lowest paid in Australia”.

“WA teachers at the top of the scale are already paid 10 per cent more than our teachers, with pay rises of 8.25 per cent over two years to come,” she said.

“NSW teachers at the top of the scale are paid $2822 more than Victorian tea­chers for the same work.”

Ms Bluett said Victoria was losing quality teachers to other states and some were leaving the profession.

The industrial action follows statements made by world-renowned Ame­rican education expert Michael Apple that there was “no robust evidence anywhere” to show performance pay raised achievement scores for students.

Performance pay for teachers remains a major hurdle in negotiations between the union and Victorian government, which says it wants to reward high-performing teachers.