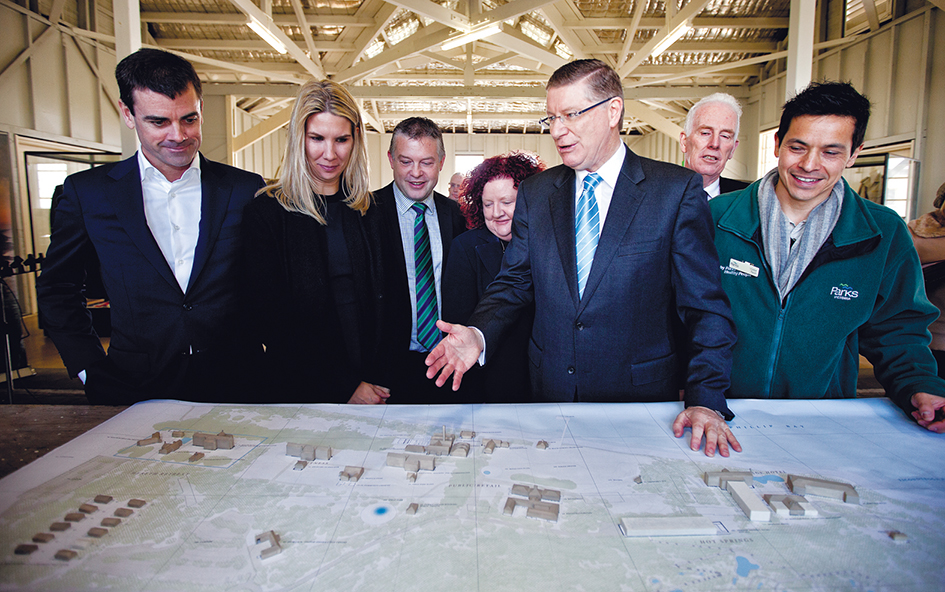 A PROMINENT Portsea family is behind a $100 million plan to make Point Nepean National Park “a world-class tourist destination and education precinct”.

The Premier Denis Napthine was at the park’s Quarantine Station on Friday to announce government backing for the bid to develop the precinct by the Point Leisure Group.

The group’s directors and Myer family members Richard and Trine Shelmerdine said their plan would “transform Point Nepean’s historic Quarantine Station in a way that shares and maintains its unique heritage and natural environment”.

They predict Point Nepean will become a “world-class destination … combining its natural beauty and heritage with a high quality hotel, function and events centre, health retreat, hot spring facility, museum and a multitude of recreational, cultural and educational opportunities”.

Dr Napthine said the plan includes a marine education and research precinct with the University of Melbourne; luxury and “camping style” accommodation; shops, cafes and restaurants.

“The proposal is in keeping with the site’s cultural and Indigenous heritage, while delivering stringent environmental protections,” Dr Napthine said.

Environment Minister Ryan Smith said the plan would secure the future of buildings with heritage and cultural significance “and are in pressing need of maintenance”.

Mr Smith said the proposal “accords with the height of existing buildings”.

Mr Shelmerdine says he is a “contributing member” of the Nepean Historical Society, Nepean Conservation Group and founding committee member of the Sullivan Bay Action Group.

In 2011 Mr Shelmerdine was granted approval by the Victorian Civil and Administrative Tribunal to subdivide The Sisters historic property in Point Nepean Rd, Sorrento.

“Our family has been part of the local community for generations, and we are committed to embracing and protecting this special place,” Mr Shelmerdine said.

“We feel very privileged to be part of a project that will revitalise a place that has played such an important role in Australia’s history. This will redefine Victorian tourism and create a world-class health and wellness destination that will inspire visitors to discover, unwind, and participate in the wonders of this area.

“We see this as the beginning of the next stage of Point Nepean’s history and look forward to working closely with local community groups and the Victorian Government to make it a success for all involved.”

Dr Napthine said the plan “strikes the right balance between leisure and learning activities, and maintaining the site for future generations to enjoy”.

He said up to 220 jobs would be created during construction “and up to a further 390 ongoing jobs”.

“This site is set to attract further investment and tourists from around the world, delivering a huge economic boost to the Mornington Peninsula and the state’s economy,” Dr Napthine said.

Nepean MP Martin Dixon said the Portsea polo, craft markets and concerts will continue to be held at Point Nepean with scope for “additional tourism and investment ideas”.

While providing greater public access, the plan “follows stringent guidelines that will protect and enhance the local environment, our coastline and the historic buildings on the site”, Mr Dixon said.

Flinders MP and Conservation Minister Greg Hunt, who has championed several past proposals at Point Nepean, said he was “delighted that the long held community goal of marine education at Point Nepean using the existing but empty heritage buildings is now very close”.

“The proposal appears modest, sustainable and focussed on education and wellness, while also highlighting and celebrating the heritage of the old Quarantine Station buildings,” Mr Hunt said.

“The old quarantine station has unique examples of grand heritage architecture, which have been restored by the Commonwealth but which have laid dormant and empty for many years.

“This should now secure the heritage buildings for the coming century and guarantee their long term protection. The non-quarantine area of the park has long been protected and secured.”

The proposal is open for public comment at www.depi.vic.gov.au/nepean or visit Parks Victoria’s office at Point Nepean.