Mobile library off for ‘supersizing’ 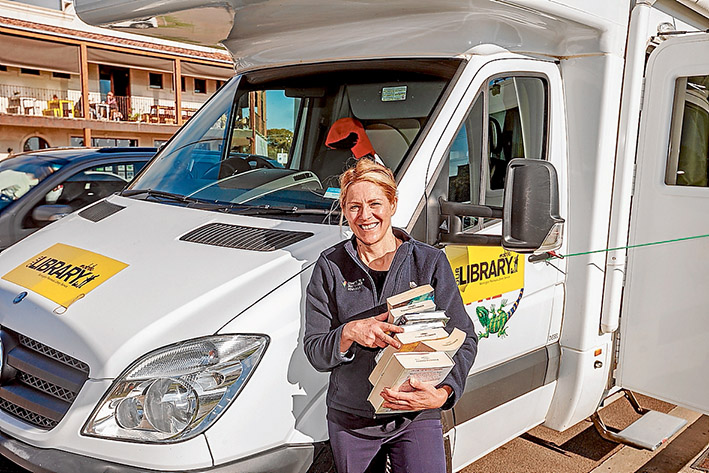 Books not tourists: The shire has leased a campervan to replace the mobile library bus as it undergoes supersizing at a cost of $285,000. Librarian Veronica Wright at Mt Martha on Friday. Picture: Yanni
Share
Facebook Twitter LinkedIn Pinterest Email

THE shire’s distinctive mobile library has gone to the renovators for a $285,000 makeover that will include expanding its middle section.

It will away for about eight weeks and has been replaced by a more modest vehicle that will trundle around the shire’s 16 mobile library stops to keep far-flung readers happy.

The book bus was driven to a truck body specialist in Melbourne last week to receive a new expandable middle that will take it from about 2.5 metres wide to six metres, enough room for a small lounge area, according to the shire’s library boss Geoff Carson.

“The lounge area will have three computers – a PC and two tablets,” he said. “The bus will be repainted with a more eye-catching design.”

The renovation was supposed to occur last year but when the shire “went to market” its budget was short by about $70,000. The shire already had a state government grant of $125,000 from the 2013-14 Living Libraries program but had to wait for extra cash to take its contribution up to $160,000.

It is the first renovation of the bus since it was bought 15 years ago. The prime mover is changed every five years.

The mobile library holds about 4000 books, CDs, DVDs, magazines and other items.

The mayor, Cr Bev Colomb, said the refurbishment would allow “library users to access our collection with increased access to computers and in greater comfort”.

“The refit will include a new body with an extended capsule to include public computers and wi-fi access. In addition, there will be new shelving, seating and a streamlined interior,” she said.

“The temporary van will provide an abridged service offering library members the ability to return items, place and collect reservations and access a selection of books and other items for borrowing.”

The revamped vehicle will be unveiled in late July.