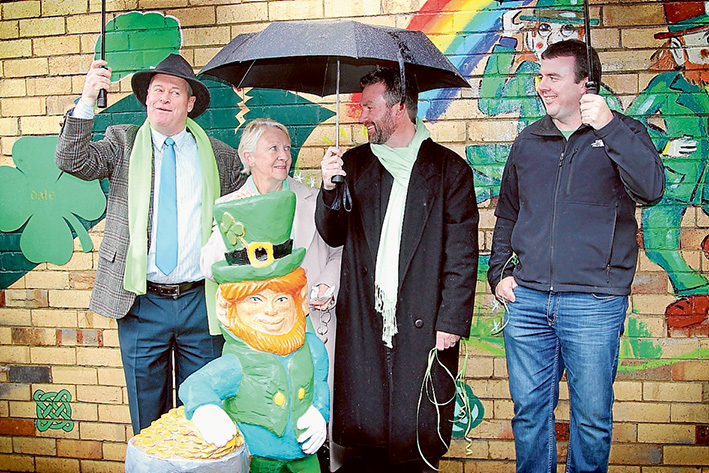 IT was a sea of green in Hastings on Sunday 12 July, as a large crowd braved bitter cold and driving rain to remember Hastings jeweller Dermot O’Toole.

Sunday marked two years to the day since his murder and the laneway O’Toole Way that now bears his name stands as testament to a much-loved man whose life was taken by a savage and cold-blooded murderer.

There were tears for Dermot, but also laughs as the family reflected on the wonderful times.

An air of uncertainty still hangs heavily over the family as they fight for justice for Dermot.

Last October, Gavin Perry was handed a 27-year sentence by Supreme Court Justice Elizabeth Hollingworth. The terms of the sentence required Perry to serve a minimum of 23 years before being eligible for parole.

The family were left shocked and devastated by the leniency of the sentence, for a crime which the judge had noted for its premeditation.

Earlier on the day of the murder, Perry had entered the jewellery store with then girlfriend Rhiannon Bailey.

Return he did. High on ice, and brandishing a knife he had just stolen from a nearby supermarket, Perry entered the Jewel Shed just before 5pm. The ensuing confrontation between Mr and Mrs O’Toole and Perry lasted little more than 30 seconds but left Mr O’Toole dying on the floor of his jewellery store after being stabbed twice in the chest; the knife having been thrust into the defenceless O’Toole to the full depth of the blade.

At the sentencing in October, Justice Hollingworth noted that “Not only was Bridget O’Toole physically attacked herself, but she had to watch her husband of 41 years die in front of her, after he came to her defence.”

In the two years since the murder of her husband, Mrs O’Toole has battled for justice for her husband while dealing with her own trauma from the incident.

As Justice Hollingworth said, “She has become very fearful and hyper-vigilant. She has been diagnosed as suffering from post-traumatic stress disorder. She feels guilt at having been the one who survived”.

After the sentencing of Gavin Perry, the O’Toole family successfully convinced the Director of Public Prosecutions to appeal the 20-year sentence handed down to Perry for the murder of Dermot O’Toole.

To their horror, Perry also lodged an appeal against the severity of all his sentences; for the murder, for intentionally causing injury, for the armed robbery of the Jewel Shed, and for two earlier armed robberies.

The fact is that the sentence handed down did not reflect community expectations.

Perry had over 200 convictions for offences, mainly involving property, and had been sentenced to six years for armed robbery in February 2010.

Perry had been released on parole from prison on 7 February 2013, and was still on parole when he committed the spate of armed robberies culminating in the death of Mr O’Toole.

Perry has been held in protection throughout the term of his imprisonment, yet he is asking to be released back into the community earlier.

The appeal will be by three judges and is scheduled for Monday 20 July.

Driving rain marked the first anniversary of Mr O’Toole’s murder. Ferocious weather then delayed the arrival of Gavin Perry for his sentencing last October. On Sunday, the rains and howling wind did not abate for the second anniversary.

Hopefully Gavin Perry will be served justice at the coming appeal, and the sun will shine on O’Toole Way.