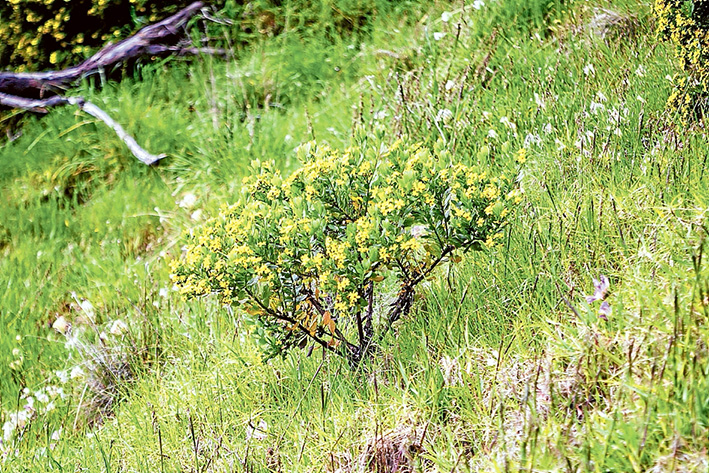 IT’S concerning to see the amount of boneseed growing beside peninsula roads this spring.

After a couple of weeks out of the area, was driving back to the southern peninsula via the Mornington Peninsula Freeway in early September. Coming into the Arthurs Seat cutting that’s spanned by La Trobe Pde, there on the inland side of the VicRoads freeway were dozens of boneseed bushes, some several years old, their bright yellow flowers gleaming in the sun.

South African boneseed (Chrysanthemoides monilifera) is one of the state’s worst pest plants, according to botanists and the state government’s own experts.

The damnable stuff is all over Arthurs Seat, too.

Parks Victoria has spent plenty in recent years getting rid of boneseed as well as other pest plants like sweet pittosporum and sallow wattle as part of bushfire fuel reduction. But it’s never been able to get rid of boneseed completely. Volunteers groups have tackled the weed, too, but it keeps coming back like some kind of zombie.

Boneseed was brought to Australia as an ornamental garden plant in the 1850s. It was used extensively to stabilise coastal sand dunes and to control erosion, mainly between the 1940s and 1960s, before it was declared a noxious weed in Victoria in 1969. By then it had spread along many parts of the coastline of the peninsula and other parts of the state, and had become a big problem in the You Yangs across Port Phillip.

In 2000 it was listed as a “weed of national significance” and one of the 20 worst weeds in Australia because of its invasiveness, lack of natural enemies, ability to spread, and environmental and economic impacts.

It has spread successfully because it grows in relatively nutrient-poor soils, tolerates salt on coastlines, and germinates easily including after fire.

The big fire on Arthurs Seat in January 1997 gave boneseed and blue bell creeper a chance to become well established and they’ve been a problem since.

Each boneseed plant produces a huge amount of seed – up to 50,000 seeds a plant – that can remain in the soil for 10 years or more. The species can quickly recolonise a burnt area.

Boneseed has woody branched stems and oval shaped leaves with irregularly serrated edges. New growth is typically covered by white, downy, cotton-like material. The yellow flowers have 5-8 petals and are up to 30mm in diameter. The round fleshy green fruit turns black when mature and contain a single smooth round seed 6-7mm in diameter. The seed is bone coloured when dry, hence the name.

Boneseed has a shallow root system and this makes it easy to remove, and hand-pulled plants can be left lying on the ground as long as roots are not in close contact with the soil surface.

If the plant has not dropped its seed, they can be collected in bags and burnt.

Boneseed is best destroyed on site (for example, mulched, dried on platforms or hung in trees) and then buried in landfill. Seeds should not be included in garden compost.

There’s plenty of good info on the internet.