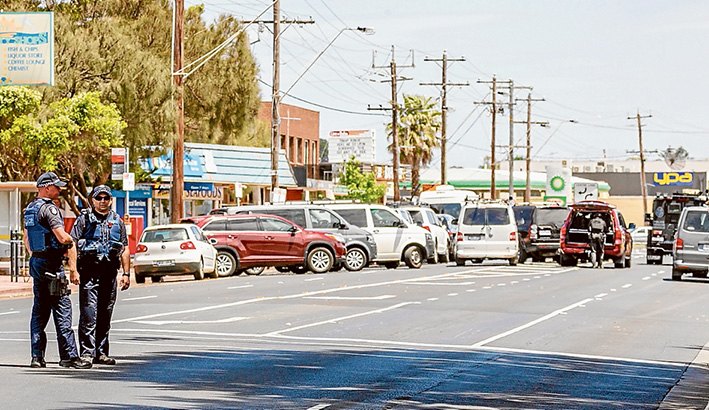 RYE traders are counting their losses in the wake of a siege on Saturday 5 December when a man held two women hostage for almost eight hours.

Police closed Point Nepean Rd between Weeroona and Weir streets and evacuated shops, including those at the Safeway shopping complex, when a 69-year-old man armed with low-calibre weapons was seen entering the Little Beach Cafe, Point Nepean Rd, at 7.45am.

While no one was injured, the same can’t be said for traders’ cash registers: Not only did they lose a day’s takings, ruined stock and wasted staff wages, but many are finding they cannot claim the losses on their insurance.

Their policies honour claims only after 48 hours’ loss of trade – not eight hours – making the losses even more galling because that Saturday was tipped to be one of the busiest in the lead-up to Christmas.

Anton Vigenser, of Freaky Tiki cafe, said he lost “a couple of thousand” on the day, as well as the cost of ruined stock.

“We were 15 minutes into being open with all the food out of the fridge and serving customers when we got the call to leave,” Mr Vigenser said.

“Don’t get me wrong, it was a serious situation and the police were there doing their job – but it was frustrating for traders.”

He said he had to “press a police woman to speak with her supervisor” so that he could return to his shop to turn off the oven. “It would not have been ideal to leave all that food burning and possibly causing a fire in that situation.”

Mr Vigenser said 13 shops were affected by the siege shutdown, including Woolworths, whose management said the store was closed for 10 hours.

A spokeswoman for the insurance company (which did not want to be identified) where many of the traders have policies, said the wording of the policy was crucial. “To be successful, a claim for business interruption insurance has to be the result of an actual or physical threat to the property, such as a storm, fire or bomb threat,” she said.

“Traders need to prove that the threat is to their property, and that it covers prevention of action over that time,” she said.

She admitted the clauses contained “grey areas” and said some traders had discussed claiming compensation from the gunman, but predicted this would be unlikely to succeed.

“We hung about,” he said. “We went to the indoor market hoping it would all blow over in a couple of hours, but then I was again told I wasn’t allowed in, so I went home.

“Later I called a staff member after it was all over and we went down and closed up. It was a totally wasted day.”

Police commander Inspector Karen Nyholm, described the siege as a “volatile situation” on the day. She later issued an open letter thanking the public for “their understanding and support of our need to keep the area shut down at what should have been a busy Saturday morning for local traders, residents and visitors.”

At the height of the siege, about 80 officers – including heavily armed members of the special operations group – were stationed outside the shop where the hostages were being held.

At least one shot is alleged to have been fired into the ceiling of the cafe during the stand-off, which ended when two women were released through the front door at about 3.20pm, followed shortly after by their alleged captor.