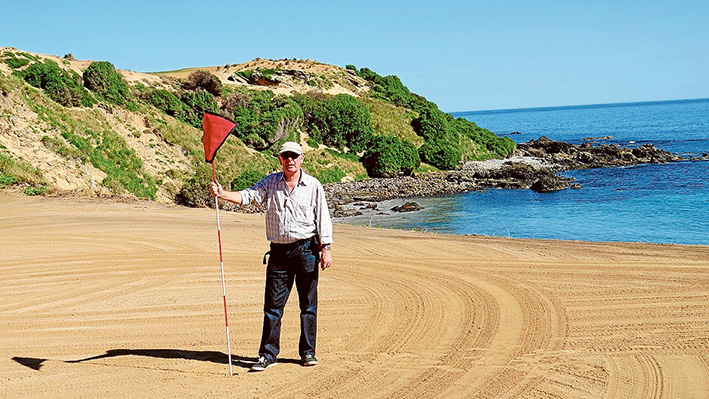 A GOLF course designed and developed by experts from the Mornington Peninsula has been ranked 24th best in the world – and it has been open just two months.

The Cape Wickham Links course on King Island was given the honour by Golf Digest magazine from 32,000 courses world-wide. The Digest is regarded as the world’s most widely-read golf publication, with monthly exposure to 5.5 million readers. It produces its World’s 100 Greatest Golf Course rankings every two years.

The links course was developed by Duncan Andrews, of Flinders, owner of The Dunes Golf Links, Rye, and was co-designed by Darius Oliver, of Mornington and American Mike DeVries.

“It would be great for the work these guys did building one of the world’s best golf courses to be recognised,” Mr Oliver said. “They did an incredible job.”

Golf Digest described the Cape Wickham course as one of the “hottest new layouts on the globe”. Editor Ron Whitten described the Cape Wickham layout as “heart-pounding, starting along rocks and crashing surf, moving inland but not out of the wind, returning to ocean edge at the downhill 10th, pitch-shot 11th and drivable par-4 12th, then wandering into dunes before a crescendo closing hole curving along Victoria Cove beach, which is in play at low tides”.

Mr Oliver, whose dream job as a course architect takes him all over the world evaluating courses and consulting with developers and designers, said Tasmania had two top 40 courses: Barnbougle Dunes 33 and Barnbougle Lost Farm, 40.

He said Cape Wickham, which opened in late October, had already generated enough custom to warrant extra flights to the island, with seven airlines listed online.

He said the publicity was attracting “a bunch of US golfers in the top 100” to the island and was confident it would exceed their expectations.

“I have been to 1500 courses in 50 countries and this is the best property I have seen, with its pristine coastline, layout, dune structure – and topped off by the tallest lighthouse in Australia overlooking it.

“The locals are thrilled; they’ve had a fair bit of negative publicity over the past few years and the population is less than half its peak.”

Although surprised by the speed at which the course entered the World’s Top 25, Mr Oliver said it was “validation of a quest to bring world-class golf to King Island”.

“Our aim was to leave behind something special that would attract thousands of golfers to the island. All credit goes to [developer] Duncan Andrews for having the courage to invest in something so remote and so risky, and for entrusting Mike DeVries and I with the design. We were largely unproven.”

“From day one all involved in the Cape Wickham project knew they were dealing with an exceptional piece of land, and to create anything less than a sublime golf experience would have been disappointing. It is pleasing that this is being formally recognised in a world context by an eminent magazine.”