Sharks dip early in the season 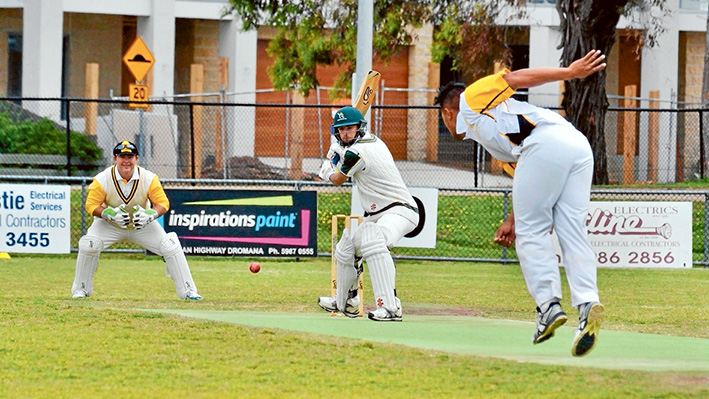 SORRENTO sits in the bottom half of the MPCA Provincial ladder after being convincingly beaten by Baxter on Saturday.

Despite some resistance in the middle order from Liam O’Connor (50) and Bobby Wilson (53), the Sharks were unable to reel in the total.

Brandon Rulach also worked hard in the middle order for the Sharks with 36 but it could only drag the total to 223 from 75.1 owners, handing Baxter a 65 run win.

Chamika Sattambi finished with 3/35 from 15 overs after snaring 2/7 on the opening day, while Todd Quinn proved to be the menace with the ball, taking 5/57 from 17.1 overs.

Peninsula Old Boys head the log-jam at the top of the ladder after easy working over Pines.

The Old Boys, Mornington, Baxter, Langwarrin and Pearcedale are all on 30 points after three rounds, while Mt Eliza is on 26 points, which is just the start they needed.

With Pines’ skipper Craig Entwhistle unable to bat, that made the home team’s batting line up vulnerable.

When star recruit Damien Lawrence was sent packing for a duck, the task of getting the required runs was always going to be tough.

Rhys Chalkley was strong with 60 and Harley Peace-Stirling was good with 57, however there was no other resistance offered.

Adam Gailitis started the damage for POB and he finished with the mighty figures of 5/43 from 18.2 overs. Callum Parton snared 2/37 from 12 overs to have 6/64 off 20 overs for the season.

The impressive Mornington bowling line up was too slick for Somerville on Saturday, rolling them for 161.

With 254 already in the scorebook, the Doggies’ attack went about dismantling the Eagles batting line up.

Skipper Matt Foon was the pick of the bowlers once again with a staggering 3/10 from eight overs. Rob O’Toole helped himself to 3/37 from 15, Leigh Lambert claimed 2/35 and Luke Popov 2/43.

Matty Roach was the best of the Somerville bats with 54.

Langwarrin made light work of Crib Point at the nest.

Joel Bateman was superb at the beginning of the innings with 3/9 from eight overs while skipper Trav Campbell set the tone early, claiming 3/36 from 14 overs.

Mt Eliza sits just where it wants to after winning outright against Long Island.

Shaun Knott picked up 3/22 from 18 overs and Justin Savio snared 3/26 in the first innings, while Justin Grant and Nick Baron took 2/23 and 2/2 respectively. Andrew Tweddle top scored for the Islanders with 19.

A great knock of 79 to Max Blackburn and 61 to Will Kennedy helped Pearcedale record a strong victory against Moorooduc.

Chasing 240 for victory, the Panthers got the runs in the 58th over.

Nathan Hangan was the pick of the Ducs’ bowlers with3/39.