Cruel end for ‘puppies’ of the sea 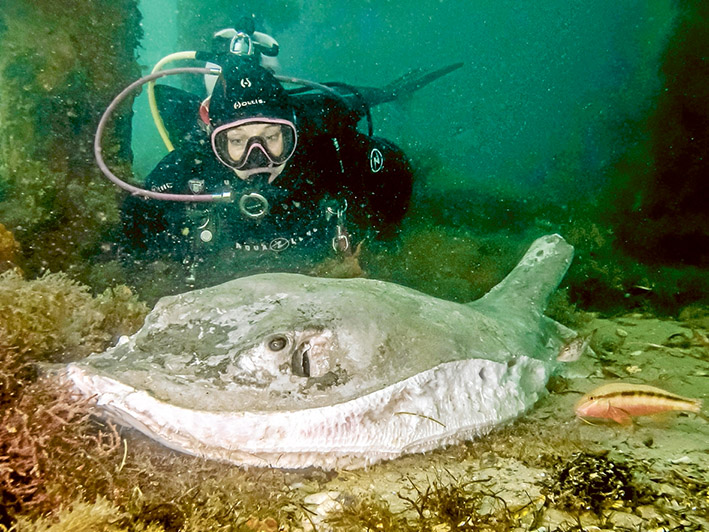 Ray ban: Keen scuba diver P T Hirschfield wants the state government to ban the catching of smooth rays, including sting rays, near piers and jetties in Port Phillip. She says this ray was probably dumped under Rye pier after having its wings cut off for bait.
Share
Facebook Twitter LinkedIn Pinterest Email A CAMPAIGN has been launched to stop the mostly hidden killing and maiming of a group of fish known as smooth rays.

The rays are rarely sought after for food but are often killed so they won’t waste a second bait or out of fear, in the case of stingrays.

Although the rays will only attack if provoked, scuba diver PT Hirschfield says the level of fear has risen noticeably since Australian wildlife expert Steve Irwin died in 2006 after being pierced in the chest by a stingray barb while filming for the documentary, Ocean’s Deadliest.

Hirschfield likens the subsequent backlash against stingrays to the heightened fear of sharks caused by Steven Speilberg’s 1975 thriller, Jaws.

She dives almost daily and has become increasingly horrified and saddened by the numbers of dead smooth rays littering the seabed around piers on the Mornington Peninsula and the rest of Port Phillip. “The huge smooth rays I dive with are gentle, curious puppies.”

Hirschfield wants rays to be protected near piers “as they are rarely the intended catch of fishers”.

“People seem to have a real dread of stingrays and seem to assume they will attack. They don’t really understand that they can become tame and are easily caught.”

Hirschfield blames anglers for most of the ray carcasses near “because they don’t want to catch them twice”.

A closed Facebook group using the name Project Banjo Action Group has about 300 followers dedicated to raising awareness of the needless cruelty being dealt to rays, which include fiddler rays or banjo sharks.

Hirschfield discovered one of the most callous instances of cruelty under Rye pier where a 250-300 kilogram ray had been dumped after having its wings and tail hacked off.

She believes the meat may have been kept as shark bait “which would be against Fisheries Victoria Regulations”.

“The rays at peninsula piers are iconic and much loved by locals, tourists, divers, snorkelers and fishers alike. An image of me with the remains of the ray at Rye has begun to circulate and cause much outrage in social media,” Hirschfield said.

“The Project Banjo Action Group is campaigning for greater education about rays on the peninsula to combat the Irwin Effect, as well as better compliance with Fisheries regulations.

“Like timid, reclusive blue ringed octopuses that have only ever been responsible for three fatalities in history, stingrays have been much maligned and have become the victims of global smear and fear campaigns and unjustified knee-jerk reactions.

“Ignorant fishermen frequently cut off their barbs and tails, throwing the mutilated animals back into the ocean or killing them without justification – what utterly cruel, irresponsible and senseless abuse of these gorgeous, essentially harmless creatures.

“The reality is that stingrays do not prey on humans in any way, instead preying on smaller marine creatures.”

Hirschfield says regulations allow for a bag limit of five rays of one or more species. However, the same regulations also state that it is an offence to fail to return [unwanted] fish to water without injury or damage.

“Fisheries Victoria advises that fishers are to ‘dispatch fish you intend to keep immediately’. It is unacceptable common practice that the tails, barbs and wings of various species of sharks and rays – including fiddler rays and huge smooth rays – are often hacked off while the animal is still alive.”

Hirschfield said the group wanted to increase “awareness and appreciation of” rays throughout the fishing and non-fishing community; and increase the understanding and compliance with regulations and best practice “as an integral part of the licensing process”.

More signs about regulations, best practice and penalties were needed on the fishing end of piers.

Hirschfield stresses that the Project Banjo Action Group “is not a vigilante group”.

“The success of this campaign is dependent on operating from a position of respect for all parties involved. Showing disrespect for those with opposing views and behaviours may inflame the situation rather than resolve it.”

Details of any offences can be reported to Fisheries on 133 474.