VCAT ‘no’ to quarry permit 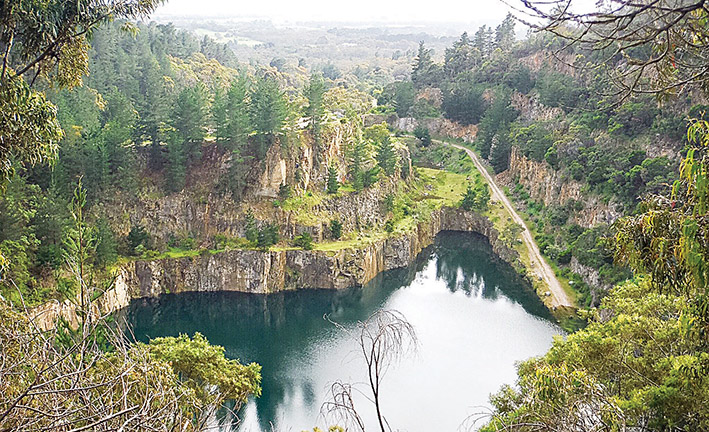 The Victorian Civil Administrative Tribunal (VCAT) has determined that the planning permit for the former Pioneer quarry in Boundary Rd, Dromana has expired.

Community groups are hailing the decision as a victory over Hillview Quarries although one leading campaigner cautions “we’ve won a battle, but not the war”.

The decision handed down on 27 April is the second win for the protesters who also four years ago successfully campaigned against the quarry being used as a rubbish tip.

The ideal outcome, according to Dr Fancett would be for the former quarry to be added to the neighbouring Arthurs Seat State Park.

“It’s an amazing piece of land … which ultimately we’d like to see opened to the community. There could be walking trails around the lake and the waterfalls are absolutely stunning.

“If you go there it feels like the nearest house could be 100 kilometres away.”

Hillview CEO Paul Nitas said on Thursday that the company was “at this stage reviewing the [VCT] decision to map out a way forward”.

The decision had only been handed down the previous Friday and it was “too early in the process” to have yet decided what steps to take next.

Mr Fancett said it was still open for Hillview to appeal against the VCAT decision through the Supreme Court.

VCAT member Judith Perlstein ruled that the quarry permit had expired “because the use of the land for the purpose of extractive industry did not start within two years of the issue of the permit”.

And if the use did start within two years of the permit being issued it has expired “because the use of the land for extractive industry has been discontinued for … more than two years”.

Jeremy Gobbo QC, appearing for Hillview, told the March hearing that once a resource was in place “you should be able to extract from that resource until it has been exhausted”.

Ms Perlstein said although “this principle” may be recognised in the shire’s planning scheme it would still depend on the validity of a planning permit and did not depend such a permit may never expire due to discontinuance of use.

If extraction was discontinued for more than two years it would be “appropriate” to seek permission to continue extraction “and enable a review and consideration of any changes”.

“This principle applies with even more force if the period of discontinuance is 15 years or more,” Ms Perlstein stated.

Ms Perlstein found that the permit had expired, confirmed the shire’s decision and ordered that no amendments were to be made to the permit.

A compulsory conference scheduled for 27 April and the hearing dates of 13 June were cancelled.

Mr Fancett said he doubted that the controversy over the quarry’s future was over.

“Obviously Hillview lost a lot of money, with time and effort being put into the landfill proposal,” he said.

“If they had got the permit [for quarrying] it would not have had an expiry date and they would never have to rehabilitate the site.”

Mr Fancett said the permit which applied when Hillview bought the quarry from Pioneer in 1998 set out remediation conditions, including redirecting a creek back to its original path and removing extensive earthworks.

He said the 15-hectare quarry site was surrounded by 70 hectares of Hillview-owned land, which contained “enough rock to last decades”.

“But if they apply for a permit [to extract the rock] they’ll face more rigorous conditions and environmental effects and EPA reports.”

Mr Fancett blamed pine trees planted in the quarry for a four to five hectare area within the state park “where the only living things are pine trees”.

“There’s not much we can do now, but the council should oversee and enforce the conditions on the permit and see that the site is rehabilitated.”