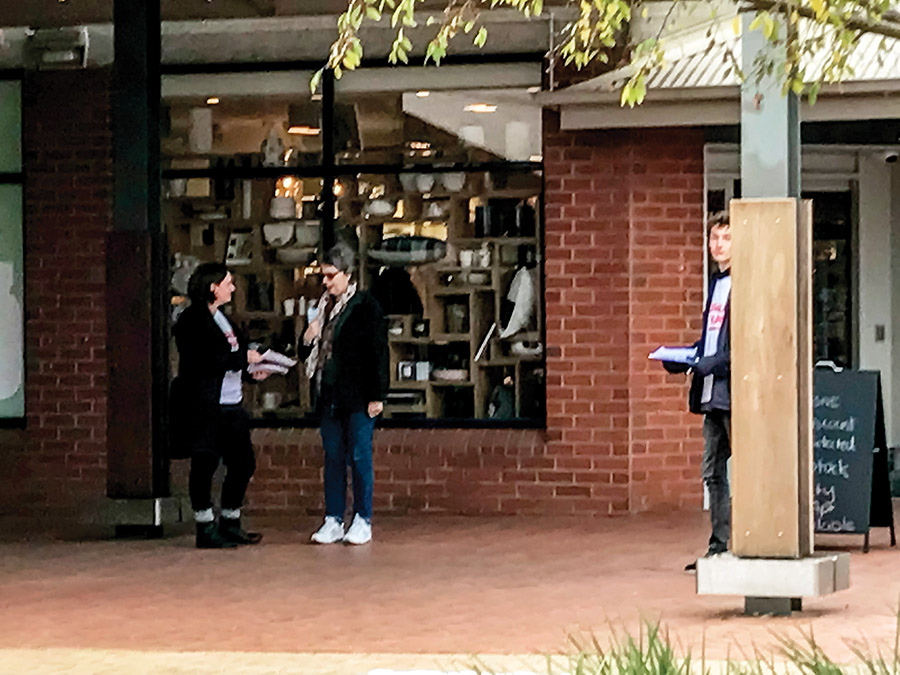 FOUR collectors in white and red “Legalise vaping” t-shirts were approaching shoppers at Balnarring Shopping Centre last week seeking signatures for a petition to support the use of electronic cigarettes (e-cigarettes).

The collectors were overheard telling shoppers that vaping was “proven to be the most popular and effective aid to quitting smoking”.

Submissions close on Thursday to an inquiry by the Standing Committee on Health, Aged Care and Sport called in May by Health Minister and Flinders MP Greg Hunt into the use and marketing of e-cigarettes and personal vaporisers.

Tobacco companies have bought into the market by buying some smaller producers and health professionals say they are concerned that the use of e-cigarettes will lead young users to make the switch to tobacco.

Vaping – through e-cigarettes or personal vaporisers – consists of a battery device with an attached atomiser. A battery-powered coil vaporising the liquid for inhalation.

Supporters say vaping can be done with or without nicotine. The device is said to provide the “nicotine that smokers crave without the deadly tar and particles that smoking generates”.

“Non-nicotine e-cigarettes, which come in a range of colours and flavours, can be lawfully sold in some states and territories,” she said.

“New laws due to come into effect in Victoria on 1 August will ban e-cigarette sales to children, ban advertising and promotion of e-cigarettes at point-of-sale, and prevent e-cigarettes being smoked in smoke-free areas.

“A comprehensive review of all published studies shows there is low-to-very-low” evidence that e-cigarettes help people quit.”

An online campaign to legalise the practice says: “In the US, Canada, New Zealand, UK and EU, vaporisers are helping millions to stop smoking and improve their health. But, in Australia, these life-saving devices are banned from sale. This is unacceptable and is putting hundreds of thousands of lives at risk.”

Further, the campaign claims: “According to the Royal College of Physicians, vaping is at least 95 per cent safer than smoking. Studies also suggest that, when it comes to quitting, vaporisers offer a 60 per cent higher chance of success over simply going cold turkey. Sweden has one of the world’s lowest smoking rates – just five per cent thanks to a harm reduction strategy that includes vapes.”

The Balnarring collectors said they were being paid by the Australian Taxpayers Alliance, which they described as a “Sydney group that represents taxpayers, including smokers”.

The alliance website describes itself as an “innovative new activist organisation, dedicated to fighting Australia’s crippling levels of taxation, over-regulation, and government waste through the creation of an empowered and highly-mobilised grassroots movement”.

One shopper told The News the collectors were “well-drilled in their lines; they can quote from official-sounding medical authorities but, when pressed, they admit they’re British bodies who recommend vaping!”