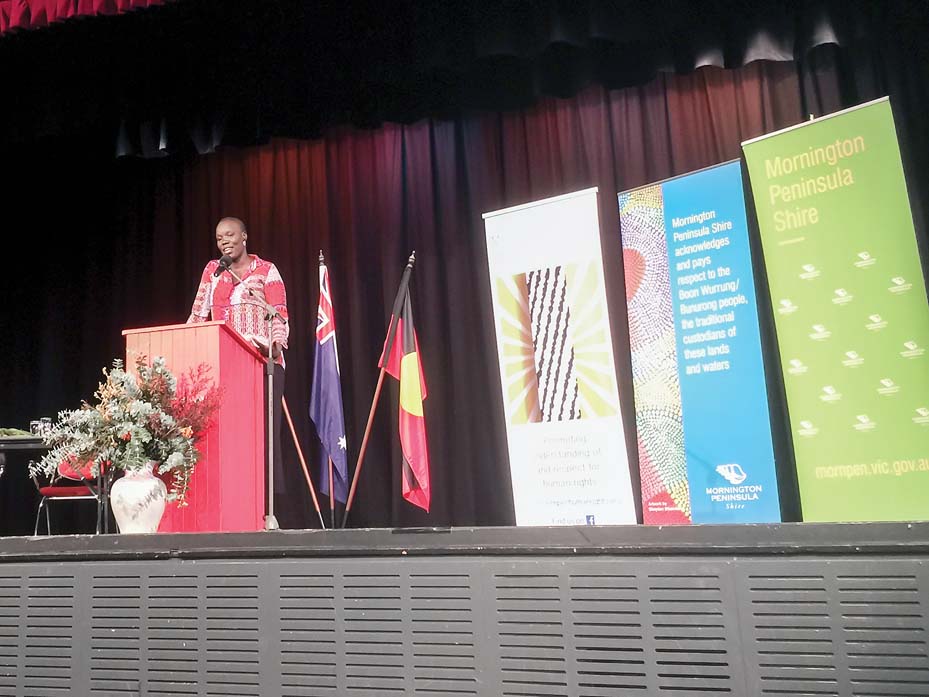 Human rights advocate and lawyer Nyadol Nyuon spoke of her family’s difficulties of adjusting to a new society after being brought to Australia from a refugee camp in Kenya.

Ms Nyuon, who was born in the refugee camp in Itang, Ethiopia, said the difficulties were faced mainly by her mother, who spoke with “limited English” and had a longing for the place and friends of her birth.

Since her family settled in Ballarat, Ms Nyuon has completed a Bachelor Arts from Victoria University and a Juris Doctor from University of Melbourne and currently practises in commercial litigation and as community advocate on human rights issues.

She said refugee parents would only choose to place their child in a boat if being on the water was safer than staying on land.

Ms Nyuon was speaking at the Wednesday 13 March meeting of the Mornington Peninsula Human Rights Group held to celebrate 70 years since the Universal Declaration of Human Rights in 1948.

The declaration proclaims inalienable human rights regardless of race colour or religion. The oration is an annual event organised by the peninsula group.

In 2011 and 2014, Ms Nyuon was nominated as one of the 100 most influential African Australians. She is currently a board member of the University of Melbourne Social Equity Institute.

Her oration at the Peninsula Community Theatre, Mornington was attended by more than 200 members of the human rights group and the public.

For further information about the work, events, newsletter and meetings of the Mornington Peninsula Human Rights Group go to mornpenhumanrights.org

At 6pm on 23 May at the Mornington Library noted foreign policy commentator professor Clinton Fernandes will speak about his new book “Island off the Coast of Asia”,  including Australian government espionage against East Timor and the prosecution pending in the ACT magistrates court.