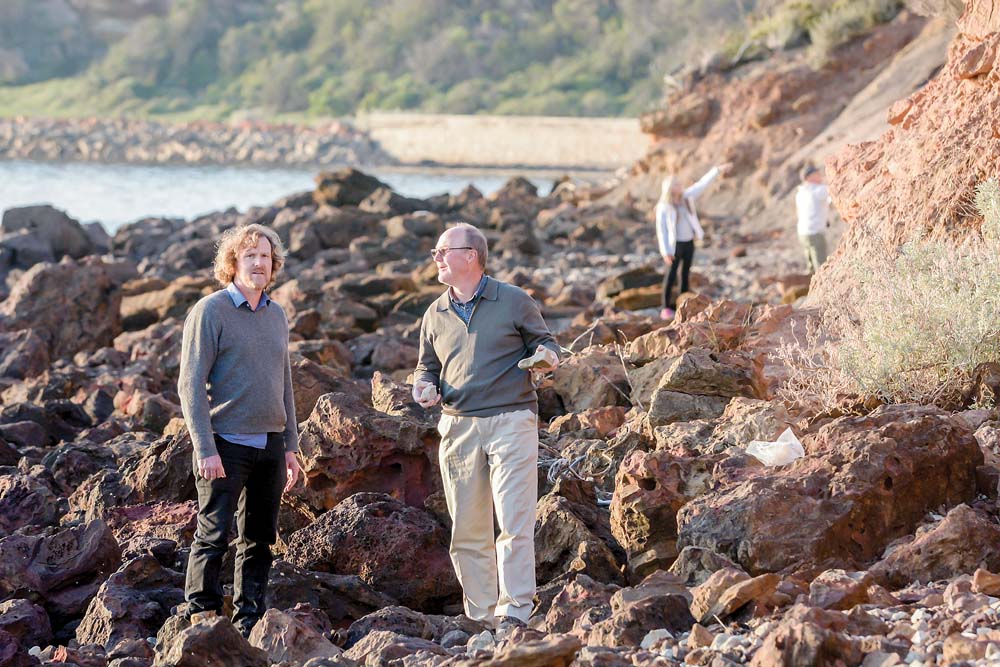 Glimpse of the past: Mornington Peninsula Shire’s natural systems project officer, Gerard Cook and Fossil Beach Interest Group convenor Ian Stevenson at the beach where movement of Selwyns Fault has exposed 15 million-year-old fossils, left, and among the ruins of the nearby kiln which was at the heart of Victoria’s first cement making works.
Share
Facebook Twitter LinkedIn Pinterest Email

TAKING a close look at the history of a cement works at Mornington can easily turn into probing ancient geological formations and life forms.

Fossil Beach, which lies at the end of a short path off the Esplanade just north Bentons Road, has long interested historians and geologists, but an insight into its history is now revealed to the public with new interpretive signs.

The four signs tell the story of Aboriginal use of the area, the value of clay deposits for making cement, which were discovered in the mid-1800s, and the fossils embedded in the clay dating back eight to 12 million years.

Visiting Fossil Beach with Ian Stevenson, convenor of the Fossil Beach Interest Group, and Mornington Peninsula Shire’s natural systems project officer, Gerard Cook provides a running commentary and descriptions of ancient and relatively modern history of Fossil Beach and how it may have appeared millions of years ago.

They are quick to add that much of the ancient history of the rocky beach and scrub-covered foreshore is pure conjecture, although there’s no doubting the fossil evidence – mainly shells, corals, tiny bones and teeth – which can be dated. One of the most striking things about the shells pointed out by Stevenson and Cook is their familiarity. Although some are extinct, they look like many shells still being washed ashore today, although their colours are faded. Some of the shells are also now only found in warmer waters.

When asked why the fossils are on the surface, Stevenson points seawards and simply replies: “Selwyns Fault.”

It seems the clay in which the 12-15 million-year-old fossils are found was brought to the surface along this small section by Selwyns Fault and the adjoining Fossil Beach fault. This area is seismically active and estimated to be capable of producing 7.5 magnitude earthquakes.

The clay, which is so interesting to geologists, caught the eye of government geological surveyor Alfred Selwyn in the early 1850s and, in 1862, James Robertson.

Robertson, an architect living in St Kilda, saw the commercial possibilities of the clay and the harder limestone nodules, called septaria, which could be used to make cement.

The septaria at Fossil Beach was thought suitable for cement, especially cement that could set under water, or Roman cement.

The resulting cement works – the first in Victoria – operated for about two years, eventually failing during a recession in Melbourne and lack of raw material in commercial quantities.

The remains of the cement works were the scene of an archeological dig in 1968, headed by Melbourne University Historian William (Bill) Culican. The dig commissioned by the then Shire of Mornington was credited as being the first archaeological dig of an industrial site in Australia.

Members of Culican’s family attended the unveiling of the new signs on Saturday 4 May, as part of the National Trust Heritage festival.

Stevenson, who spoke at that ceremony, said the remains of the cement works and the clay deposits at Fossil Beach had been recognised as being of state importance.

“Protection of the significant fossil beds is critical for awareness raising, but also conservation for future generations,” he said.

He said Museum Victoria was still conducting scientific research into the fossil layers and examples from Fossil Beach were displayed at the museum.

Stevenson said some concerns had been raised about fossils being dug up and removed from the beach and that “protection of all site values is paramount”.