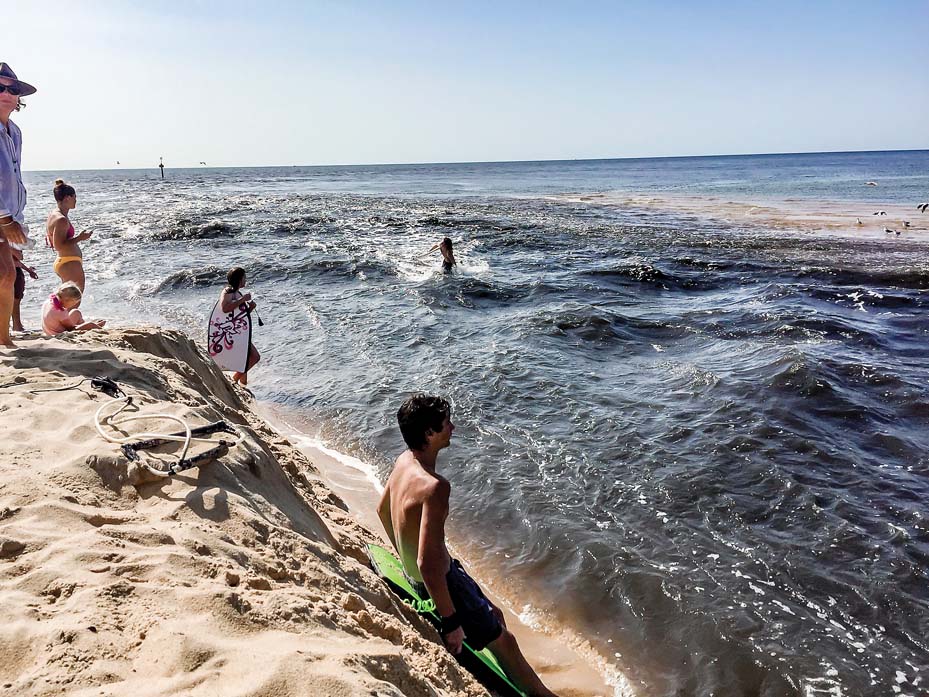 WILDLIFE is being threatened by the artificial opening of the entrance to the Balcombe Estuary at Mt Martha.

Estuary wildlife has adapted to a natural cycle of flooding as the sandy barrier at the entrance to the bay opens or closes depending on the weather and tides.

However, this cycle is disrupted when a channel is cut through the sandy barrier – or berm – to create waves for body boarding or surfing.

“This is probably great fun, but we need to understand that artificial human intervention in the flooding and emptying cycle poses a serious risk to the health of the estuary,” estuary watch coordinator and vice-president of the Balcombe Estuary Reserves Group Bruce Ferres said.

Mornington Peninsula Shire prohibits cutting a channel through the beach to drain the estuary and signs warning that it is an offence are displayed on paths leading to the beach near the bridge.

Mr Ferres said a group of teenagers dug a channel across the beach on 21 January “despite pleas and warnings” which resulted in the estuary being almost empty by the following morning.

“Body boarding or surfing the surging waters is probably great fun, but we need to understand that artificial human intervention in the flooding and emptying cycle poses a serious risk to the health of the estuary.

“Estuaries should be left to follow their own natural rhythms in response to environmental influences.”

“Most estuarine organisms require water that has a good supply of dissolved oxygen, which is typically found in the surface water layer due to physical exchange with the atmosphere and photosynthetic activity.

“If this water is lost from the estuary too often then the estuarine environment becomes degraded.”

Although most wildlife living in the estuary had adapted to constantly changing levels of salinity “there are limits”.

“If there are not significant periods during the warmer months when the estuary mouth is closed, resulting in minor flooding of wetlands, the breeding cycles of fish, birds and other organisms are disrupted,” Mr Ferres said.

“Our amazing wildlife is under enormous pressure at the moment due to drought and devastating fires so we need to mindful of all the potential negative impacts the actions of humans can have.

“We all love our local estuary and want it to flourish for future generations to enjoy. Allowing nature alone to determine when the Balcombe Estuary entrance to the bay is opened helps to protect the estuary ecosystem.”