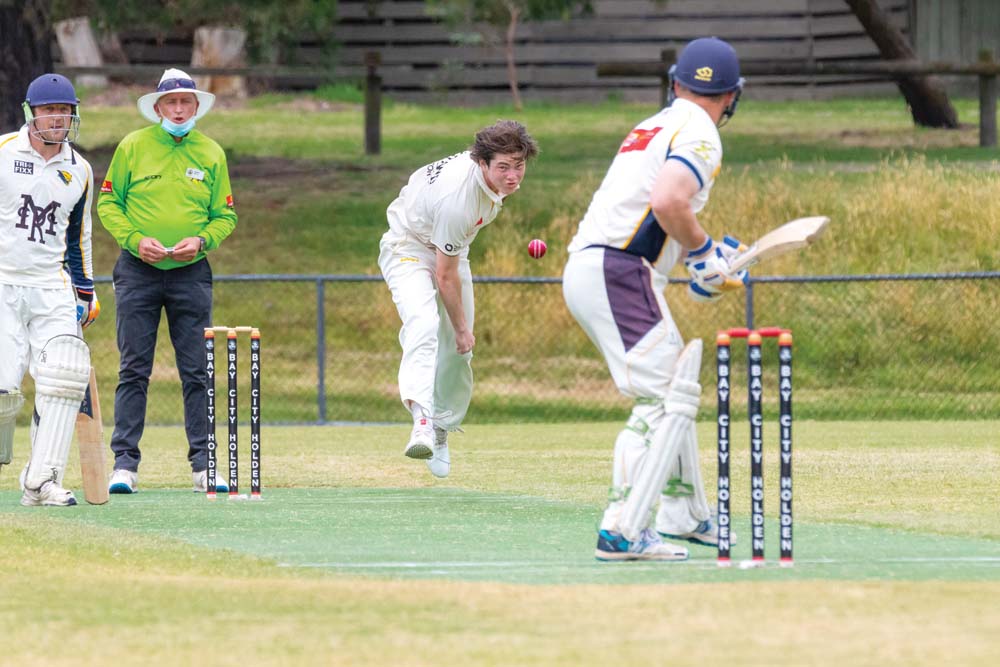 LONG Island got the better of Seaford Tigers in a competitive clash at Belvedere Reserve on Sunday.

Choosing to bat first, Long Island got off to a good start. Despite star batsman Nick Jewell being dismissed for a relatively low score, they managed to put 179 runs on the board. Zachery Wilson top scored with 42.

The Tigers showed plenty of fight at the crease, and at 2/91 were in a good position to go on to get the win. Their first drop batsman Ashley Mills hit eight boundaries on his way to a big score of 69.

After Mills was dismissed the Tigers struggled, losing their last five wickets for 43 runs. The Tigers ended up all out for 157, needing 23 more runs to win.

Moorooduc had a tough day at home, as Pines managed to chase down a competitive total.

Moorooduc set their opponents a target of 156 to win.

Pines had to work hard for it, but ended up securing the victory with four wickets and four overs to spare. Number three batsman Harley Peace-Stirling was impressive for Pines, scoring a half century.

At Bruce Park, Heatherhill were able to claim victory over Main Ridge.

Main Ridge chose to bat first and set a target of 145. Brett Maxwell was impressive for Heatherhill, with his bowling figures of 4/27 restricting Main Ridge to a fairly low score.

Heatherhill chased their target down with six wickets to spare. Kristian Miller was their best with the bat, scoring 69.

Somerville notched up an easy win against Flinders by a 104 run margin.

ROSEBUD and Crib Point played a close match on Saturday at Olympic Park.

Crib Point chose to bat first and put 140 runs on the scoreboard.

Rosebud’s run chase got off to an awful start, and they were struggling badly at 4/33. A big partnership between Lyle House and Ashley Nagel got their chase back on track.

With just one over left to play, Rosebud managed to reach their target. House’s innings of 57 runs proved a big help.

A big innings from opener Mark Cooper helped Carrum get a win playing away at Delacombe Park.

Cooper’s knock of 79 helped his side set a target of 194 for their opponents to chase.

Delacombe Park got off to a decent start but ended up all out for 127, comfortably short of what was needed to win.

Frankston YCW took the difficult path to victory against Hastings.

The Stonecats batted first and struggled, ending up all out for 99. Their bowlers would have to work hard to get their side the win.

Hastings’ top order batsmen were all dismissed without making an impact on the scoreboard. At 8/51 they looked doomed to defeat.

A spirited showing from tail order batsman Isuru Dias gave the chasing side a glimmer of hope, but his knock of 25 wasn’t enough to get his team over the line.

Hastings was bowled out for 83. Jason Hannah took 3/6 from his five overs.

Opener Jedd Savage scored 77 runs for Dromana as his side smashed Pearcedale.

Pearcedale lost the match by 134 runs.

TYABB snatched a win in a thriller against Tootgarook on Saturday.

Tootgarook chose to bat first and put together a strong total, finishing their innings at 167. Opener Travis French’s knock of 44 was the best for his side.

Tyabb’s run chase came down to the wire, and without a mid-innings score of 42 from Malith Chathuranga they may have fallen short.

With one over left to play and just two wickets in hand, Tyabb scraped over the line.

Boneo scored a win at home in a high-scoring clash against Balnarring.

The home side took to the crease first, and finished their innings with 226 runs on the board.

Balnarring put together a spirited innings in response, with first drop Mark Walles’ score of 45 the side’s best.

Balnarring fell short by the expiration of their innings. They still needed another 40 runs to win when stumps was called.

A mammoth opening partnership of nearly 200 runs between James Quarmby and Gordon Waterfall got Carrum Downs an easy win against Ballam Park.

Waterfall raised the bat for his century, scoring 111 runs. The huge innings came on the back of a knock of 54 last week.

A half century from Jake Smart helped Mt Martha get the win against Skye. Mt Martha won by 41 runs.

PENINSULA Old Boys have got their season started with two wins in a row after defeating Mt Eliza.

Mt Eliza chose to bat first but could only score 110. Number three batsman Ben Tracy put in a good shift for his side, scoring 41 runs.

Peninsula OB made quick work of their target, and secured the win with five wickets in hand and 12 overs left to play.

A brilliant performance from Matthew Prosser got Langwarrin a victory over Mornington.

Mornington went in to bat first and put together a decent start before Prosser did the damage. He tore through the middle order, posting figures of 6/13 off just under seven overs.

Mornington were bowled out for 114.

Langwarrin chased down their target with six wickets to spare. Prosser also put some runs on the board, scoring 33.

Baden Powell set their opponents a target of 139 to chase down.

Red Hill struggled when their turn to bat came. The Hillmen ended up all out for 58, with Klan dismissing most of their top order.

A disappointing performance by Sorrento saw them slump to their second straight defeat for the year.

Baxter were impressive at home, bowling the Sharks out for 68. They ended up meeting that target in just 22 overs, with nine wickets in hand.