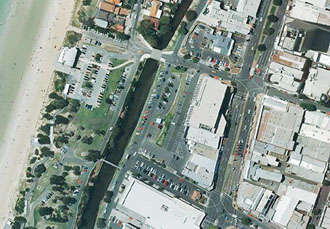 SOUTH East Water is paying $4 million for the site of its new Frankston headquarters.

The land facing Kananook Creek stretches from Beach St in the north to Playne St and is owned by Frankston Council.

A South East Water spokesperson said the price was market value and that moving to a new building there would “save us and our customers at least $20 million over the next 20 years”.

Council has agreed to ignore its own building height regulations to speed up approval for the building on land now used for a car park.

A South East Water sewage pumping station that has been at the site since 1968 will be removed.

“We also have another sewage pump station on the other side of Kananook Creek,” the spokesperson said.

“With Frankston’s population continuing to grow, our engineers are currently looking at the best ways to ser­vice the region’s sewerage needs and consolidating these two pump stations is one option we are exploring.”

Architect BVN has been appointed to design the new building, which is scheduled for completion in 2015.

“With the very best designers on board, we will develop a building that will activate and enhance the boulevard along Frankston’s foreshore for the greater benefit of the local community,” South East Water managing director Kevin Hutchings said.

“BVN’s emphasis is on designing a building that complements Frankston’s foreshore and can meet the needs of South East Water, our customers and the broader community.

“While it is still early days in the planning process, it is our intention that the new building will be at least a five-star energy efficient, open-plan office space that will have a modern and creative flair to add to the environment of Frankston.”

Mr Hutchings said BVN had designed some of Melbourne’s “very best buildings”, including the NAB and Myer head offices at Docklands.

“It is the leading international design house behind the Olympic Tennis Centre in Beijing and the Olympic athletes village in London, and its team is currently designing the Australian Embassy in Bangkok,” he said.

BVN’s national director James Grose saw the building as a “great opportunity to contribute to the renewal of Frankston’s foreshore”.