Wharf era comes to a close 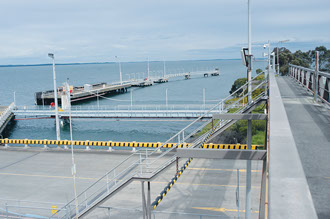 BLUESCOPE’S wharf will fall silent in November as the last wharfies are paid off and the last steel-carrying ship leaves Hastings.

Patrick runs the wharf for BlueScope, which has been using chartered bulk carriers to bring hot rolled coil steel from Port Kembla since the Iron Monarch made its final voyage to Hastings last October.

The company closed the mill, commissioned in 1978, on 19 October last year. It also closed one of two metal coating plants on 22 October. The closures cost 200 BlueScope and 70 contractor jobs.

Iron Monarch has been scrapped in India, an ignominious end for the revolutionary ship built by BHP at Whyalla, SA, in 1973. BHP became BlueScope in 2003.

Iron Monarch was converted in 1985-86 to carry slab and other forms of steel loaded through a huge stern door.

BlueScope spent $17 million overhauling the vessel in Singapore in 2011, but it only worked for nine weeks before the company decided to scrap it.

The company will bring coil steel exclusively by rail from November, which is likely to cause concern for people living along the rail line.

The News believes BlueScope will need more than the two trains each day currently operated by Pacific National for the steelmaker.

Earlier this year, The News reported Maritime Union of Australia official Garry Keane saying the decision to transport 650,000 tonnes of steel by rail with Pacific National from Port Kembla in NSW to Hastings each year was “flawed”.

The rail network won’t be able to cope with the demand and BlueScope will have to charter a ship with a foreign crew, he said.

Rumours about the future use of the wharf at Hastings include saw logs being trucked from Gippsland and exported by ship to Asia.

Cars were unloaded at the wharf in the 1970s in a short-lived experiment.

Former MUA stalwart Frank Thompson said bringing steel by rail exclusively had been tried in the 1980s and had generated massive protests on the Frankston line and the Stony Point line north of Hastings.

BlueScope has used three different bulk carriers since the demise of the Iron Monarch, the most recent the MV Diamond Harbour.