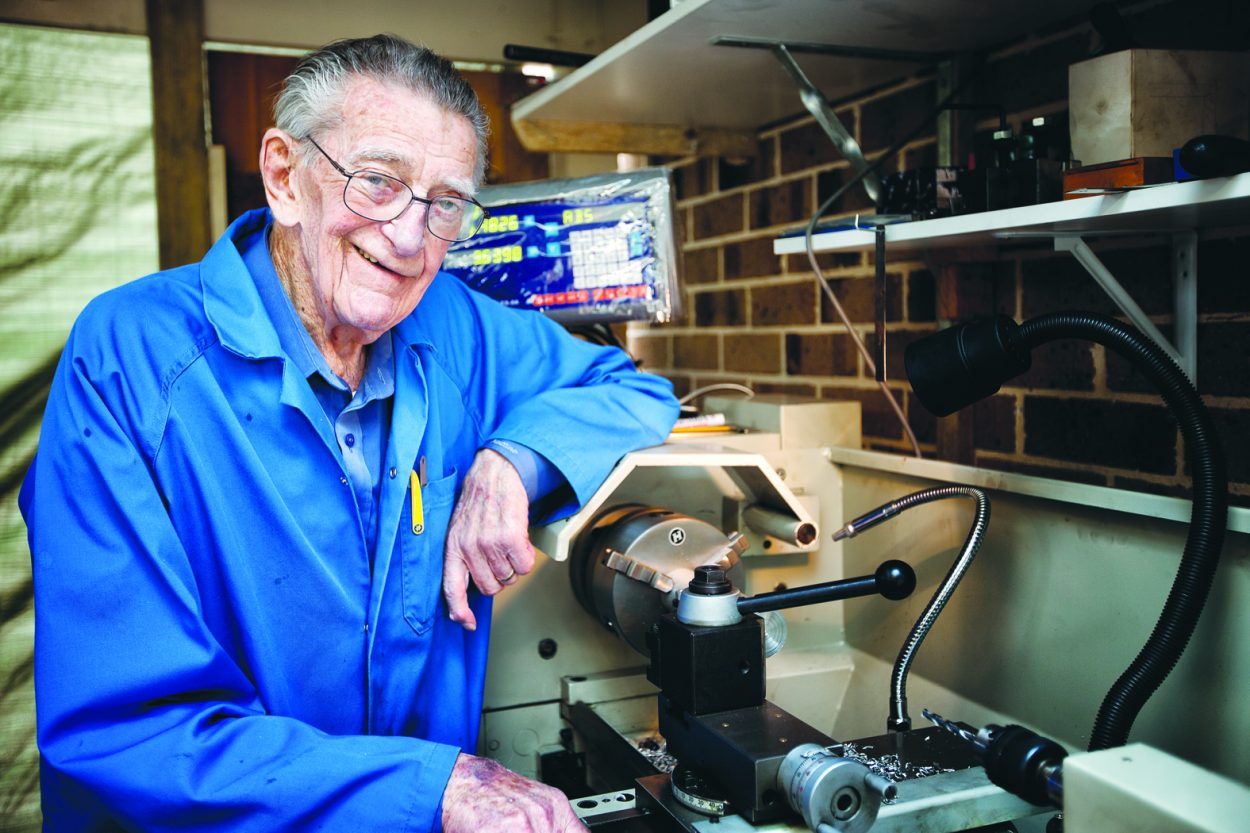 There appeared to be nothing unusual about this until you discover Mr Mott is aged 85. The advert was the first step in a return to work that had been forced on him by financial circumstances.

Mr Mott was born in West Melbourne in 1927. He went to local schools, finishing at Footscray Tech where he completed his Intermediate Certificate. He started an apprenticeship in fitting and turning at a paper mill in Fairfield where his brother had also trained.

After the paper mill he went to the Commonwealth Aircraft Corporation in Lorimer St, Port Melbourne, to gain more engineering experience in machinery. Sir Lawrence Wackett was running the corporation.

Mr Mott worked in the machine shop for 15 years on non-destructive testing, including working on Avon, and Pratt and Whitney aircraft engines.

Next he worked for Keep Brothers and Wood as a sales representative mainly selling automotive parts.

After about six years he started his own business, Ezyspray Manufacturers, making hand-operated spray guns.

Growing up in Footscray, Mr Mott was a scout and scout leader for many years. Other interests included squash and barracking for Footscray; he witnessed the Bulldogs’ one and only premiership win in 1954.

As a young man, he had a girlfriend named Gwen but they drifted apart and married other people.

Gwen was married with three children when one day she happened to meet Mr Mott’s mother and mentioned she was looking for work; this led to her working in Mr Mott’s office.

His marriage had ended some years before and, three years after meeting Gwen again, they married, 34 years ago.

After living at Mt Waverley, the Motts moved to a small property in Island View, Tyabb, where they spent 26 happy years.

During this time Mr Mott renewed the interest in aircraft he had developed in his CAC days. He joined Peninsula Aero Club, bought a Cessna 150 and learned to fly, later upgrading to a four-seater Cherokee Cruiser.

He flew about 1000 hours before being grounded about 10 years ago because of a heart condition.

The past few years have not been happy ones for the Motts. Gwen developed Alzheimer’s disease, which saw the sale of their home to raise the money to get her into a nursing home.

Mr Mott lives in a unit in Hastings and visits Gwen daily in her Somerville accommodation.

Other family difficulties have motivated Mr Mott to come out of retirement.

One of his son-in-laws had a furniture franchise that folded due to the economic climate.

This put the son-in-law and a grandson, who did the furniture deliveries, out of work, but both have joined Mr Mott in his new business.

He has leased a small factory in Tyabb and bought a new lathe, milling machine, welder and drilling stand.

Al’s Jobbing Shop is a small engineering business, specialising in making or repairing parts for aircraft and vehicles, with non-destructive testing a specialty, but willing to tackle jobs of all sorts.

“My return to the workforce at 85 is mainly due to financial reasons, but I’m keeping active and doing work that I’ve always enjoyed,” he said.

UPDATE: Sadly, Mr Mott’s venture had barely got off the ground when his health deteriorated and he was admitted to St George’s Nursing Home in Altona Meadows in mid-2013.

In September 2013, Alan’s wife, who had been in care for several years suffering from dementia, passed away.

On Sunday 23 February 2014 Mr Mott had a heavy fall at the nursing home and was admitted to the Western General Hospital where he died two days later on 25 February. He was 86.