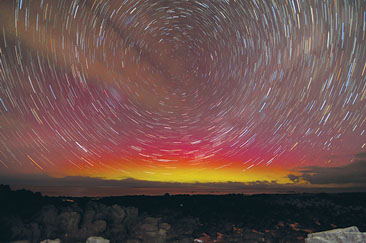 LONG, cold nights perched behind a camera on a Flinders beach have paid off spectacularly for Seaford photographer Steven Kuiter.

Mr Kuiter, 31, captured images of the Southern Aurora, also known as Aurora Australis, on Monday night and the results are causing a stir on the internet, where he and his photography mates try to outdo each other with their experimental photos.

The former Patterson River secondary student, who says he failed photography because he was “no good at the written side”, may have bragging rights for many days.

Mr Kuiter has spent many nights at Flinders this year seeking to capture the elusive aurora in a year where the Sun has been producing powerful coronal mass ejections (CMEs).

Auroras are created when energetic charged particles from the Sun collide with the Earth’s the high altitude atmosphere.

Next year will be even more spectacular when the Sun reaches the peak output of an 11-year cycle.

People are surprised when shown photos of the Southern Aurora, Mr Kuiter says. “I didn’t know you could capture auroras from Australia; I thought you had to go to Antarctica,” is a common reaction.

Most associate images of auroras with the northern hemisphere, where far more people live closer to the North Pole in countries like Finland, Sweden, Norway, Russia and Canada.

Mr Kuiter receives text alerts about expected CMEs and heads down to Flinders, the best location in the region for night sky photography. It’s dark because of few street and house lights, and the beach beside the golf course faces due south to Bass Strait.

On Monday night he arrived at a spot near West Head at about 9pm and the picture on this page was taken about 10. The skywatchers stayed till 3am.

Mr Kuiter said he and his friends have thought about jumping on a plane to Tasmania “but there’s no guarantee of the aurora making an appearance”.

“You could spend many weeks in a place like Finland CHK and not see the Northern Aurora,” he said, although going to northern Europe is an ambition.

Mr Kuiter also photographs wildlife and it’s not hard to understand why – his father Rudi Kuiter is a renowned underwater photographer and his mother Alison Kuiter is well known for her images of terrestrial nature. Her work has featured in The Times in the past two years as well as in other newspapers, magazines and calendars.

Mother and son had photos of ducks on promotional material for an Australia Post series of bird stamps earlier this year.

Mr Kuiter took photos of the Leadbeater’s possum in disputed logging areas in central Victoria this year, sometimes standing or sitting for hours to catch the rare and elusive animal, the state’s threatened faunal emblem.

The same patience, determination and technical skill is needed to capture a possum as the Southern Aurora.

n For the technical, Mr Kuiter used small format Nikon cameras – a D300s and D7000 – 35mm and 11-16mm lenses, and 30 second exposures. He shoots long exposures on cloudless nights to get the star trail effect.