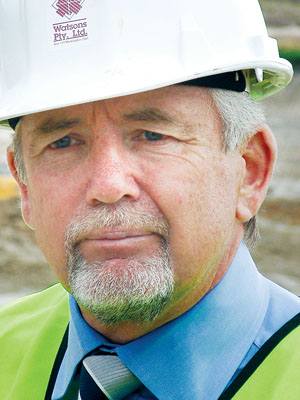 ELECTION candidates delivering final statements to the election office in Rosebud late last month were surprised to see one of their number pull up in a Porsche.

Leaving the engine running, John Woodman strode into the office, handed over his election material and strode out again.

Watsons’ website states Mr Woodman “has qualifications in urban development from RMIT (University) and has spent the past 30 years in the land development industry advising developers of the means of obtaining the best and highest yield from their properties”.

“In recent years in addition to the project management of the development of large estates, he has led the town planning department of the company, successfully rezoning large tracts of farmland and land within green wedges for residential, commercial and industrial developments.”

Mr Woodman is the surprise packet of this month’s shire council elections, a man whose company has had a long involvement with planning on the Morn­ington Peninsula, with the shires of Flinders, Hastings and Mornington, and with the “super shire” created by the merger of the three by the Kennett government in 1994.

John Woodman grew up in rough and tumble Springvale and arrived on the peninsula in 1981 as a 29-year-old project manager on the way up. He had secured a six-week contract to help manage the construction of a gas plant in Watt Rd, Mornington, for the Gas and Fuel Corporation.

Other contracts and work on the peninsula followed. Mr Woodman says he bought Watsons in the early 1990s. “Jack Watson had subdivided most of the Mornington Peninsula,” he says.

Mr Woodman has made Watsons the pre-eminent development “one-stop shop” on the peninsula and the southeast with a reputation for shepherding difficult projects through labyrinthine planning laws.

Two big notches on his belt include the $650 million Martha Cove marina development at Safety Beach and Wyndham Harbour marina project at Werribee South, both envisaged in the 1980s. He is a shareholder in the Wyndham project.

The News asked the 60-year-old why he was standing for council.

“The peninsula has been good to me and I want to give something back,” he said.

“We need a long-term plan for the peninsula, a 20- to 50-year plan for provide for tourist and new residents.”

He says the shire should “get involved now in the proposed expansion of the Port of Hastings”.

An infrastructure levy on port land could raise $200 to $300 million to build the best schools, hospitals, transport system and community facilities.

Developers are paying $250,000 per hectare on the other side of Melbourne and a similar levy could be put on the 2700 hectares of port-related land at Hastings and Tyabb, he said.

“There are 200-300 blocks of land at Crib Point that could generate millions for the shire,” he said.

He said Exxon Mobil was happy to have the former BP refinery land at Crib Point rezoned to residential.

(The refinery site is jointly owned by Shell and Exxon Mobil through a company called Crib Point Terminals.)

Asked about a potential conflict of interest if he was elected to the council, Mr Woodman conceded he would be “subjected to some scrutiny”.

Asked why he had given his second preferences to Cr Anne Shaw, he said she was a councillor when Martha Cove started and he had confidence in her.

Mr Woodman – who describes himself as a consultant to the land development industry and an urban planner – said that if elected he would set aside 20 hours a week for council work. His son had started working at Watsons 10 years ago and was taking a larger role in running the company and this allowed Woodman senior more flexibility in his working week.

It’s certainly not illegal for a developers’ consultant to stand for council, but a Cr Woodman would have to be in and out of the council chamber faster than Tony Abbott trying to dodge Craig Thomson voting with the federal Coalition.

Watsons has been involved with some of the biggest and most controversial projects on the peninsula in recent years including housing subdivisions, two helipads in Rosebud West, T’Gallant’s attempt to increase seats from 60 to 274 at its Main Ridge restaurant, and Chas Jacobsen’s proposal to build four houses in the green wedge at his Norman Lodge estate.

It’s plain Mr Woodman is standing to support Cr Anne Shaw, but his idea to levy Port of Hastings land is a ripper.