Tulli and Wilma back in the bush 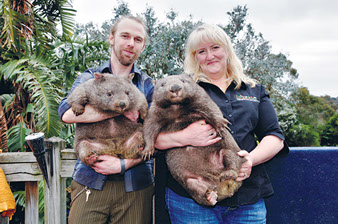 TULLI the wombat was rescued from his dead mother’s pouch more than a year ago and last weekend was taken back to the bush as a 20kg adult.

Tulli and her “sheltermate” Wilma are among the animals rescued each year and taken to Animalia Wildlife Shelter in Frankston.

The wombats have been taken to a bush property near Nar Nar Goon and put into a small enclosure prior to being released in a couple of weeks after they have finished building a burrow and getting used to the smells and sounds of their new home range.

They are being fed twice a day by the people who own the property.

Tulli weighed less than 350 grams, about one and half cups of water, when she was taken from her dead mother’s pouch on the side of the road.

“She had a few scratches and bruises on her back, legs and the back of her head, but apart from that she looked fine,” said Michelle Thomas of Ani­malia.

Wilma was brought to Animalia a few months later. She was about the same age as Tulli and the pair has been raised together by Ms Thomas and a team of about 27 “shelter helpers”, who look after all kids of native ani­mals except kangaroos.

The shelter has four wombats being raised to adulthood – Wilson (from Wil­­sons Promontory), Millie, Dizzy and Oren.

Animalia has between 1500 and 3000 animals go through its books each year, from inspections on the side of roads (often bad news) to simple rescues and complex rehabilitations lasting many months.

The numbers are boosted at this time of the year when orphaned ducklings are brought in, with 35 arriving on one day recently.

The shelter has been flat out since the devastating Black Saturday fires of February 2009.

Recent warm weather has seen echid­nas out and about, with eight res­cued animals brought to the shelter in the past two weeks.

About half the volunteers are aged from 15-18 and the shelter is looking for about eight new people as well as foster carers, who are shelter helpers with experience and take animals home. Helpers mainly come through Frank­ston Council’s volunteers’ web­site, Seek.com’s website and school community service programs.

Ms Thomas said the truth about what happens to native animals motivates many people to volunteer at Animalia and other shelters.

“This is not a petting zoo; tasks in­clude scrubbing cages and removing animal droppings. It’s not glamorous work.”

Caring for so many different ani­­­mals is an expensive business, Ms Thomas said.

“We rely on donations, small grants from the Department of Sustainability and Environment, and our own mo­ney,” she said.

There’s a bit of a crisis at the moment with the shelter running low on funds. “It’s a regular problem but we’ve been under a bit more financial pressure since the bushfires. It’s hard to say no to the animals.”

For more information about Ani­malia Wildlife Shelter, to donate funds or get an animal rescued, contact Michelle Thomas on 0435 822 699. Website: www.animaliawildlife.org.au