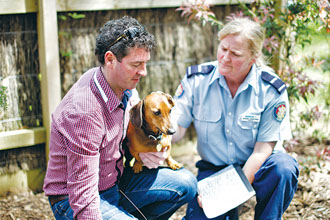 TOP chef Max Paganoni is heartbroken. While he was making sure customers left his restaurant at Red Hill Estate satisfied with their meals, something dark and sini­ster was happening just kilometres away at his home.

Each day when Mr Paganoni leaves the house, he first lets out his miniature daschund dogs, Levi and Zucker.

The dogs are in at night, but enjoy time together in the garden by day.

Her still-warm body was found by a shocked Mr Paganoni at about 8pm.

“I had just come home from the restaurant and went outside to feed the dogs when I found her,” Mr Paganoni said on Monday.

“She was still warm, so I think she was probably shot about 7 o’clock.”

Mr Paganoni, who was raised on a farm, said he was concerned that “someone is walking around here with a gun and this is a residential area” .

He said there was no exit wound and believes the weapon might have been a slug gun, or air rifle, rather than a firearm.

As for Zucker, he appeared to be wondering why his mate was not getting up.

“I called the police straight away and a vet will look at Levi to see what killed him,” Mr Paganoni said.

She said detectives would probably be investigating the case once the autopsy results identified what kind of weapon was used to kill Levi.