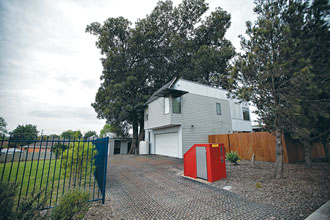 THE new Frankston Council was confronted by a thorny problem at its first meeting in Thursday night – how to save one of the city’s iconic trees.

A problem solved 10 years ago has come back to haunt the council with owners of 138 and 138A Cranbourne Rd, Frankston, wanting to remove the 120-year-old Moreton Bay fig tree growing on common property between two homes.

The tree was the centre of attention in 2002 when the previous owner of the property wanted to cut it down to build two homes.

A public outcry saw the council buy the property and engage Archicentre to design two houses that would not be affected by the tree.

The so-called demonstration project was created to show how homes and large trees could co-exist. It was part of the Year of the Built Environment in 2004.

A report to councillors on Thursday night stated “the future growth of the tree was underestimated and eight years after the dwellings were constructed, the tree is impacting on the structural integrity of at least the dwelling located to the rear of the site”.

“The roots of the tree are raising and distorting the front deck and front portion of the rear dwelling’s walls and floor framing. The tree had left a large amount of debris on the roof, impacting on guttering blockage and drainage that would contribute to overflow, roof deterioration and possible water entering the dwelling.”

The tree cannot be protected as it can be removed under the so-called 10/30 rule, brought in after Black Saturday in 2009 to allow homeowners to remove trees 10 metres from buildings and shrubs and ground cover 30 metres away.

Council officers have been trying to resolve the problem since March, but the issue only came to public attention – and onto councillors’ radar – last week.

Council officers wrote to Planning Minister Matthew Guy seeking to have the 10/30 right removed in Frankston, but this has been refused. An application to have the tree included on the State Heritage Register has also failed.

The council has two options: allow the tree to be cut down or buy the two houses, move them to council-owned land and sell them to recoup costs.

The Times understands the purchase price could be about $750,000.

The tree, which has a girth of 6.6 metres and a canopy of at least 28 metres, is worth about $190,000 in purely economic terms but its value is much higher as part of Frankston’s history.

The officer’s report stated: “The Moreton Bay fig is a landmark in Frank­ston and provides an important focal point in the landscape.

“Its loss would detract from the local environment and from the visual amenity enjoyed by Frankston residents.

“The tree is a link with similar plantings from the same era, such as those in the Melbourne and Sydney botanic gardens.”