Limited Lions call it a day 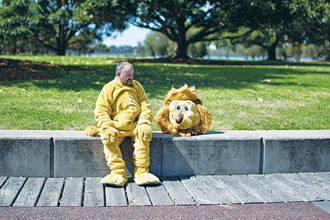 THE Lions Club of Western Port has disbanded after 44 years.

The club was down to seven members, well short of the 40 on the books almost 16 years ago when current pre­si­dent Bert Harrison joined. Ages of the seven members range from 51 to 82.

Mr Harrison and three other Western Port members will be joining neighbouring branches to continue their work in the community.

“At the height of the club, membership reached into to 50s, but due to retirement, transfers and the unfortunate deaths of some members, it hasn’t been so easy over the past few years,” Mr Harrison said.

The club held its final meeting on 11 December, but on Monday Mr Harrison was still carrying on official duties by handing out certificates to pupils at Crib Point Primary School.

The final weekly market managed by the Lions in High St, Hastings, will be on 1 January.

After this, the Thursday market will be run by Mornington Peninsula Shire and Hastings chamber of commerce with its management possibly being eventually handed over to another com­munity group.

Mr Harrison said he believed new expressions of interest would be called from would-be stallholders with the intent of seeing it change to “more of a farmers market”. Mr Harrison listed some of the club’s major projects as collecting papers for a “paper drive”, running the “lazy eye” program for schoolchildren, donating scholarships, running a primary school quiz, holding sausage sizzles, and sending children to Lions camps in Licola.

“As well, we made donations to local people, national and international Lions programs and hosted students from overseas,” he said.

Although heavily disguised, Mr Harrison was the person inside the Lions suit that accompanied all Western Port Festival parades.