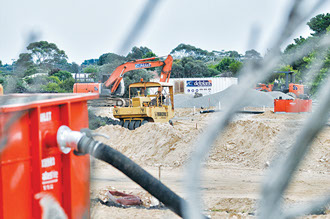 TOOTGAROOK Wetlands activist Cameron Brown of Rosebud West has had a David and Goliath-type win in the state planning tribunal.

The Victorian Civil and Adminis­trative Tribunal has found that a permit issued by Mornington Peninsula Shire for a housing development on the edge of the wetlands is invalid.

The win has been hailed by conserva­tionists as a victory for “people power” and another step toward stop­ping com­mercial and residential deve­lop­ment in the wetlands, large parts of which are privately owned.

If the development company is forc­ed to remediate the block at a cost of hundreds of thousands of dollars, it might sue the shire for giving it the all-clear to go ahead with the project.

On 20 December, VCAT member Dalia Cook ordered a stop to all work on the 41-house development at 85 Eliza­beth Ave, Rosebud West.

She said subdivision works, in­clu­d­ing the dumping of thousands of ton­nes of fill, had been done without a valid planning permit.

Pumping of water from the block into Chinamans Creek or Tootgarook Wetlands also was ordered to be halted.

“Works … must not recommence until a relevant planning permit is ob­tain­ed,” Ms Cook stated.

She said if a valid planning permit was not issued by 30 June, the owner of the land, TJBP Pty Ltd, must re­move the fill, roads, services such as sewage pipes, and reinstate the land to its original condition.

This included “replanting with indi­genous vegetation to stabilise the land and to provide for its longer term re­ha­bilitation. The replanting regime must also take account of vegetation removed from the land undertaken as part of the preparatory or subdivision works”.

Mr Brown, a member of Friends of Tootgarook Wetland Reserves, said he and his partner Jessica Durrant were pleased with the VCAT decision.

“We will have to return to VCAT for a decision on costs and how the remediation of the land will be done,” he told The News on Wednesday morning.

“The developer is now required to apply for a new permit for a subdi­vision and if the permit is not granted by 30 June, remedial works must be carried out, including removal of all fill, services and reinstatement of the land to its original contours and hydro­logical regime, including the reha­bilitation planting of wetland species,” Mr Brown said.

“This is a tremendous milestone for the community because it goes some way to returning the community’s rights to have a say on the development and exposes some of the many ques­tionable planning practices that have been applied to the Tootgarook Wet­lands precinct.”

In early November, the shire through its senior planning officer Sotirios Kata­kouzinos attempted to have Mr Brown’s legal challenge struck out (“Council fails to stop VCAT hearing”, The News, 15/11/12).

VCAT refused the shire’s request and ordered the hearing go ahead later that month.

They were up against two solicitors, a compliance officer and a town plan­ner representing the shire council and developer TJBP Pty Ltd.

In late August, Mr Galvin served documents on the owners of the land and Mornington Peninsula Shire calling for the development to be stopped (“Legal move to stop landfill”, The News, 6/9/12).

Contractors had trucked in about 70,000 tonnes of fill to bring the land surface above flood height.

Soon after the papers were served, contractors increased the speed of filling, adding B-double trucks to single tippers, which carried fill from a property off Boneo Rd in Boneo.

At the November hearing, Moreheads alleged the original 2007 permit had lapsed and the shire did not have the authority to extend and amend it.

The Elizabeth Ave property and its development permit was sold last January for $3.1 million to TJBP Pty Ltd.

On 27 August, shire councillors voted to push for Tootgarook Wetlands to be listed as a Ramsar site in accordance with the federal Environment Protection and Biodiversity Conservation Act.

After the December VCAT decision, a spokesman for Southern Peninsula Indigenous Flora and Fauna Association, which has supported Mr Brown, said the next logical step was to “find out how this happened and which officer or officers were responsible for such a developer-friendly administration howler” and “why it was then up to private citizens to proceed with en­force­ment order applications despite blatant and flagrant breaches of the permit the developers thought they had”.

- The shire is seeking people for a Toot­garook Wetlands stakeholder advi­sory committee that will contri­bute to a new wetlands strategy. Expressions of interest can be sent by Friday 1 February to Sotirios Katakouzinos at Mornington Peninsula Shire (for details, call 5950 1932). The committee will hold its first meeting on 13 February.