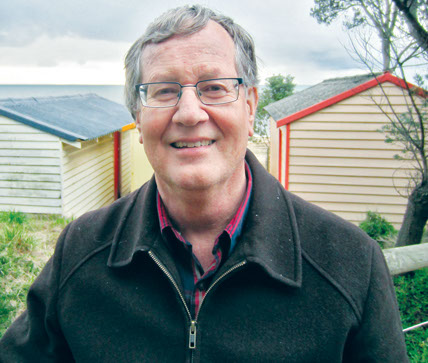 RETIRED pharmacologist Dr Martin Rush is the Australian Greens candidate for Flinders at the 7 September election.

The Greens man wasted no time commenting on peninsula issues, slamming the proposed rubbish tip on the Arthurs Seat escarpment at Dromana.

Dr Rush said he was “particularly concerned about the proposed development of the rubbish tip adjacent to Arthurs Seat State Park, the future of Hastings as a port and its impact on Western Port wetlands and marine sanctuaries, the despoilment of the Tootgarook Swamp by inappropriate development, and the general running down of public health, education and public transport services by out-of-touch governments at both state and federal levels”.

“The Greens’ recent success in state and local elections indicates voters are looking for a political party that will represent the community, stand up for what’s right, and not be influenced by developers, industry or other unrepresentative pressure groups, at the expense of the ordinary person,” he said.

“Many federal issues require a Greens member of parliament to be actively in there representing Flinders voters, but one issue particularly stands out – the Greens strongly support more than 20,000 people opposing the tip planned for Dromana.

He said the proposal for a rubbish tip in the former Pioneer quarry was “a poorly conceived plan and the very real threat to the pristine environment that the Mornington Peninsula enjoys”.

“The quarry should never have been listed as a site for a future tip.

“The proposed tip is completely inappropriate against all waste management principles. Among many problems, it has no recycling facility, has a high risk of polluting the state park, air, groundwater and Port Phillip itself, is in a high fire danger area and is in an area with threatened native flora and fauna.

“Technologies are now available and are being used that render tips such as this redundant.

“The Greens policy is the most forward-thinking political strategy on this issue.

2. Waste should be treated as a re­source and reused in a way that achieves the maximum economic and environmental benefit.

3. The full social, environmental and economic costs must be measured and factored in to decisions about creating, managing and disposing of waste.

4. The transportation of hazardous waste must be minimised, and the Aus­tralian community must be fully informed about its location, disposal and transportation.

5. Manufacturers, distributors and retailers should be required to adopt extended producer responsibility, taking financial and/or physical responsibility for a product at the end of its life.”

The father of two and grandfather of four stood in the state election in 2010 in Mornington electorate, up against the Liberal Party’s sitting MP David Morris and the ALP’s James Dooley, now a Frankston councillor.

Mr Rush had less than four weeks to campaign in Mornington as the Greens were unable to find a candidate.

Dr Rush is taking on incumbent Greg Hunt, the Opposition’s spokesman on the environment and climate action, and Labor’s Joshua Sinclair.

The Greens man has a PhD in pharmacology and is a life member and fellow of the Institute of Public Administration, Victoria.

He lives in Mornington and is a member of several community groups including environment and historical groups and a foreshore restoration group.

Dr Rush said his passions were “ethical politics, the economy, the environment and singing with choral group Mornington Musicale”.

He said the issues that inspired him to stand included “local community influence in environmental planning processes; education being given top priority for our children’s future; better public transport services for all; hospitals and community health services being accessible and affordable; and humane approaches to refugee assessment and resettlement”.