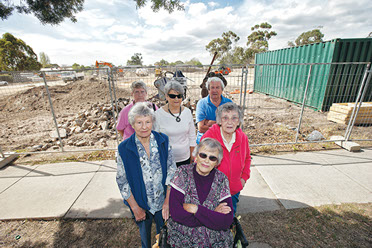 THE start of work on the Aldi store in Somerville brings to an end a long-running saga that revealed the loss of historical memory in the town, says historian Leila Shaw.

Ms Shaw’s father Thomas Brunning, a First World War veteran, in 1946 donated land for an infant welfare centre at 1097 Frankston-Flinders Rd as a practical memorial for those who served in the Second World War.

Residents worked hard during postwar austere times to raise money to build the centre, which was opened in July 1954 along with wrought iron memorial gates at the entrance bearing the word “Lest We Forget”, opened by Somerville-born Annie Sage.

The building later became a preschool. When completed, the property was signed over to  the Shire of Frankston and Hastings, then the new Shire of Hastings in the 1960s and again to the new Mornington Peninsula Shire in 1994.

In 2010, the shire council supported the relocation of the preschool to a new building behind Somerville Primary School and in March 2012 sold the land to Aldi for $750,000.

The German supermarket chain first approached the shire in July 2007. Aldi had bought the two blocks next door, 1089 and 1093 Frankston-Flinders Rd.

The preschool was demolished earlier this month and earthmoving equipment is preparing the land for the new supermarket, the fourth in the town.

The issue created controversy with the descendants of Somerville’s pioneers appalled at the proposal and newer residents keen for Aldi to open and provide competition.

Leila Shaw and fellow members of the Somerville, Tyabb and District Heritage Society ran a campaign to educate residents and the shire about the history of the preschool centre, but all to no avail.

On Saturday, Ms Shaw, 85, and the author of three history books on the district, told The News “my Somerville friends and their families tread their last years with heavy hearts”.

“I can’t even bear to look at the land where the preschool stood a couple of weeks ago. It breaks my heart.”

“I thank God most of our war veterans have died for they would never have believed that shire councillors would sell our war memorial to a commercial enterprise and, rather than return the money to the community, use it to build a government asset at the primary school.”

Ms Shaw said the district heritage society as well as the Hastings-Western Port Historical Society, Hastings-Somerville RSL and individuals who had been affected by both wars had asked the shire not to sell the land.

At a special meeting last February to hear objectors and supporters of the land sale plan, Ms Shaw said: “Destroy our memorial and you dishonour the servicemen and their families who built Australia’s first fruit-growing region.

“Over the years, various shire councils have desecrated memorials to our servicemen and women until we have but one left.

“The Shire of Hastings cut down our Avenue of Honour [in Eramosa Rd East] and lost the plaques at the base of each tree.

“They sold off our memorial cannon for scrap metal and moved our First World War memorial to an insignificant side street.

“They lost our Second World War memorial plaques from the preschool site as well as the wrought iron gates.

A condition on the land sale is that Aldi must install a war memorial plaque.

As a tradeoff for the Aldi land sale, the shire has planted an avenue of honour of Manchurian pears in Station St and will relocate the soldiers’ memorial at the corner of Jones Rd and Clarinda St to the more prominent Fruit Growers’ Reserve.

Voting against were Lynn Bowden, Bev Colomb and Graham Pittock.