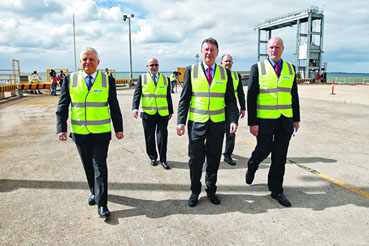 THE proposed expansion of the Port of Hastings was given a boost on Wed­nesday when the state government promised $110 million over four years.

“We came to Hastings today with great news for Victorian jobs, the eco­nomy and the local community,” the Premier said.

Decisive action was being taken to build a second Victorian container port and “ensure the state remains the freight and logistics capital of Australia”.

Dr Napthine said container trade in the state was expected to quadruple by 2035.

“In the 1960s, the former Liberal Premier Sir Henry Bolte had the vision and foresight to set aside almost 4000 hectares of land at Hastings for future port development,” he said.

The land and deep water meant Hast­ings was the best option for a container port.

Dr Napthine was referring to recent moves by western suburbs councils and transport and logistics companies promoting the so-called Bay West op­tion, a new port between Point Wilson near Geelong and Werribee South.

Last September, a confidential De­partment of Transport briefing urged the government to consider Bay West, claiming a terminal at Hastings was potentially fraught with environmental and logistical problems.

The government’s preferred Hast­ings option would involve “complex environmental management require­ments”, a “high cost” of transport links and would cost more than $12 billion.

It warned Hastings could prove too small by 2050, especially if the state government pushed ahead with plans to expand brown coal exports from the Latrobe Valley through Western Port.

At Hastings on Wednesday, Mr Hodgett said the new port would have capacity for 8-9 million containers, “almost double the current capacity of the Port of Melbourne”.