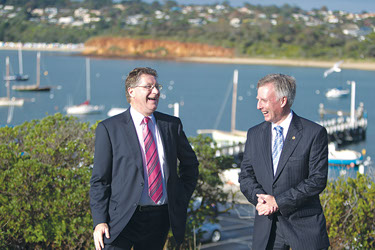 MORNINGTON MP David Morris says he is relaxed about his electorate receiving nothing in the recent state budget.

“The budget doesn’t reflect my commitment to the electorate,” he said.

Mr Morris spoke to The News

after announcing the next stage of reconstruction of Mornington pier – a $1.5 million contract to install wave screens on the upgraded middle section of the pier (“Pier wave screens in June”, The News, 21/5/13).

He said the electorate and peninsula region had done well over the past two years.

rebuild the outer, 75-metre section of the pier.

Work is expected to start in August.

Mr Morris said there was money for CCTV in Mt Eliza and Mt Martha shopping centres.

“The money has been available since late 2011 but there have been geographic difficulties with communications and the cameras have to be mounted on private buildings so it is taking time to sort this out,” he said.

The long-awaited pedestrian crossing at Mt Martha was switched on at Christmas in 2011, he said.

“I’ve been lobbying and talking about this for 20 years,” he said.

Government agency Public Transport Victoria said the Baxter line would be electrified and doubled to allow the construction of stabling yards for 30 trains and a maintenance facility by 2028.

By 2033, the Frankston rail line will be known as the Baxter-Craigieburn line and bypass Flinders St station, PTV said.

Mr Morris said there had been money for Volunteer Marine Rescue in Mornington ($211,000 in January towards a rescue boat) and Mornington Racing Club ($325,000 for sewage and waste disposal with the club tipping in an equal amount).

In the 7 May state budget, South East Water received $718,000 to continue expanding the sewage network in Mornington electorate, he said.

There had been $75 million for Frankston Hospital in recent years including $24 million being spent this year on extending the hospital and redeveloping the emergency department.