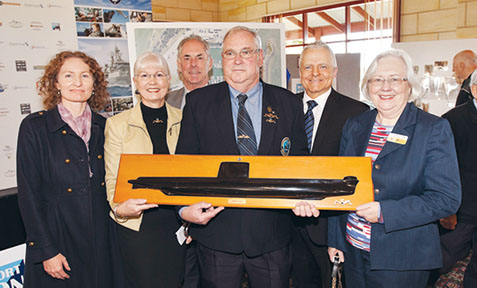 At the launch of the Victorian Maritime Centre Project in Hastings on Friday, project development team chairman Jim Schaefer said the submarine would be the centrepiece of the centre.

It will be next to the southern end of the Western Port Marina seawall in Hastings on reclaimed land. Next to the sub on the seaward side will be the maritime centre building and memorial walls. There will be a parking area for 120 cars nearby.

The association was given in-principle approval to use the site earlier this year by state Environment Minister Ryan Smith (“State ‘yes’ to sub”, The News, 19/3/13). Mr Smith granted consent under the Coastal Management Act 1995 “to use the seabed of Western Port as the location of the proposed Victorian Maritime Centre Hastings”.

“Please be advised that as the proposed use necessitates the development of the site, including land reclamation and construction of facilities, a separate application to develop the site under the Act will be required before development can proceed.”

In the application that went to Mr Smith last year, the association asked for approval to reclaim about one hectare (about 2.5 acres).

Mr Schaefer said the next step was to raise $200,000 for studies of the marine environment and mangrove area to accompany a planning application.

After permits had been granted, $1.5 million would be needed for dredging and bringing the sub ashore.

The maritime centre and other works would cost $4.5 to $5 million, he said.

“The submarine will be out of the water in 18 months and it will take four or five years to build the maritime centre,” he said.

A channel would be dredged to bring it ashore and then closed off.

The former Royal Australian Navy submarine has been moored off Crib Point awaiting a home on land since May 2002.

The association used part of a $500,000 Centenary of Federation grant organised by Peter Reith, then Flinders federal MP and a cabinet minister in the Howard government.

The balance, $150,000, has been spent on mooring, maintenance and setting up a temporary museum and maritime memorial centre in the former BP administration centre at Crib Point, near where the sub is moored.

Rust is eating away at the sub’s outer hull, although not its crucial 25-millimetre thick pressure hull.

The association attracted worldwide interest in November 2008 when it advertised Otama on eBay for $4.9 million. It received four genuine offers including one from a group aiming to restore it for use as a drug-smuggling submarine.

At the project launch on Friday, Mornington Peninsula Shire mayor Cr Lynn Bowden said it was very exciting to see “another step in this long-running saga”.

Ultimately, hopefully the Otama would be brought ashore “if we all work together”, Cr Bowden said.

The mayor said she and her husband Ron had visited the USS Bowfin submarine museum and park in Hawaii and had been amazed at the number of visitors.

The maritime centre would help the economic viability of Hastings, she said.

Hastings MP Neale Burgess said the Otama project had had a chequered history and at various times it had been a nightmare for Max Bryant, the main driver of the project.

This is a wonderful opportunity; some light at the end of a tunnel, he said. The state government was “keen to see this happen”.

“I’d like to see a big sign at Frankston pointing motorists to the submarine centre, which will happen in the foreseeable future” he said.

After the launch, Mr Burgess told The News there was no money from the state government for the project. “The association has said that once permission was granted to bring the sub ashore, it would be easier to raise funds.”

The association is also planning to acquire the former Port Phillip Sea Pilots ship Wyuna, which will be moored in a wet berth alongside the interpretation centre.

Otama will be supported by a concrete beam semi-recessed into the ground so the main deck of the submarine is level with the ground.

The submarine would be partially visible from most points on the foreshore and in time was expected to become an iconic feature and asset to Hastings, Max Bryant said.