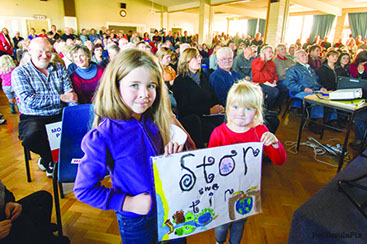 OPPOSITION to the proposed rubbish tip in an old quarry on Arthurs Seat is mounting with more than 500 people packing Dromana Hall last Saturday for the first meeting of Peninsula Preser­vation Group.

It was arguably the largest protest meeting on the southern peninsula since the anti-dredging rally on Rosebud foreshore in February 2008.

People who could not get into the hall stood outside, watching and listening through open windows.

Meeting MC Lee Burton, of PPG’s communications sub-committee, said the main purpose of the meeting was to tell people more about the proposed tip and to encourage objectors to make submissions to the EPA by 19 June.

If enough people objected, the EPA would call a 20B conference, she said. “It is a forum to address the public’s concerns and allows for a greater scrutiny of the viability and risks associated with the proposal.”

Ms Burton told the meeting that deals had been done behind closed doors for 10 or more years. “We will fight this tip till our last breath,” she said.

Peninsula Preservation Group had 16,000 supporters including more than 10,000 signing online and paper petitions.

First speaker Mary Karamitsios, a PPG member, said she was “an angry Dromana resident” and the mother of young children who was concerned about the legacy of the tip after it closed in 20 years.

“Peninsula Waste Management has made three claims: that the tip will be safe, is necessary and that there are no alternative sites. This is a load of rubbish,” she said.

Ms Karamitsios said the shire council had earmarked the old Pioneer quarry as a tip in 1996, two years before it was bought by the Ross Trust.

She said 70 per cent of rubbish would come from outside the shire so “this is clearly not about Mornington Peninsula needs”.

The Hallam Rd tip in Hampton Park, operated by SITA, would be open until 2040 and the tip at Clayton until 2020, she said.

Ms Karamitsios said the shire promoted zero waste but putting a tip at Arthurs Seat was “locking us into an old-style rubbish tip for 20 years” and “couldn’t be further from the shire’s stated aim of being a sustainable peninsula”.

PPG’s vice-president Mark Fancett, who holds a PhD in biological science, told the meeting the tip would be bigger than the existing quarry pit.

He said the lake in the quarry was about 100 metres by 200 metres but “the application is for a landfill of six hectares and waste will be stacked 100 metres high; a mountain of rubbish,” he said.

The aim of dumping 150,000 tonnes of rubbish each year in the old quarry was “three times the amount of waste dumped in the shire’s Rye landfill each year”, he said.

Pipes to remove leachate (rain and ground water mixed with pollutants and chemicals in the rubbish) would be laid at the bottom of the quarry and could not be repaired once covered with rubbish.

Dr Fancett said he was worried about the quarry pit liner – layers of rock, gravel, a thin layer of plastic and geotextile material to prevent the plastic being holed or torn.

Again, once the liner was covered with rubbish, it could not be fixed if damaged.

Attaching the liner to the quarry sides would be problematic, he said. The weight of rubbish could tear the liner off the pit sides and the joins might leak as well.

Any leakage could end up in Sheepwash Creek, which runs into Port Phillip at Safety Beach, he said.

Dr Fancett said Peninsula Waste Management would install two three-million litre tanks to hold the leachate, which would be removed by road tankers, up to 15 a day with more during heavy rain events.

“After the first two years, PWM says it wants to tap into the sewage system and pump leachate to the Boneo sewage treatment plant,” he said.

Chemicals in the leachate could kill the bacteria that processes sewage, he said.

“A tip of this size should have extensive treatment ponds, but there is not enough room.”

He said leachate pumps would need to operate for 30 to 40 years, long after the tip had been filled and closed.

Dr Fancett said 70 to 100 rubbish trucks a day would bring 550 tonnes to the tip, which would be open 7am-4pm weekdays and 8am-1pm on Saturdays.

“The trucks will have to negotiate the tricky intersection before entering Boundary Rd then travel almost the full length of Boundary Rd,” he said.

Methane gas generated by the tip would be burnt off for the first two years and then used in gas-fired turbines to generate electricity, he said.

“Operating times of the turbines are not covered in the PWM proposal,” he said.

Methane would last for up to 80 years after the tip had been filled and closed.

“Will PWM even be in business?”

Seagulls, ravens and other birds attracted to the tip would be scared off by explosive cartridge devices called Birdfrite that produced noise of 140 decibels. (Equivalent to a jet engine 30 metres away.)

Dr Fancett said he was concerned about odour from the tip. The Hallam Rd landfill had experienced long-running complaints from residents of Hampton Park living up to three kilometres from the tip.

The EPA had forced SITA to close one cell of its tip because of odour complaints.

“This can’t occur at the old quarry. It’s a single-cell tip. PWM states the odour will travel just 200 metres.”

Dromana cattle grazier Andrew Duncan told the meeting he was worried about pollution of Sheepwash Creek, which ran through his property and fed a wetland established by his father in the mid-1980s.

Leachate entering the creek could affect the organic certification of Diggers Seeds, which was opposite the tip site on Boundary Rd. It employed 60 people there and another 20 at Herons­wood, he said.

Mussel farms at Dromana Bay and Mt Martha could be affected.

“This is an absurd proposal that will affect residents and tourists,” he said.

“What’s going into septic tanks is what we are hearing from Peninsula Waste Management.”

Mr Duncan said the Ross Trust should hang its head in shame for “this dumb proposal”.

“The only way to stop it is community pressure,” he said to loud applause.

Lee Burton said the quarry was in one of the highest fire danger areas of Victoria before she introduced Dr Janet Stanley, who said the landfill would “double the fire risk in the area” putting residents and Red Hill Consolidated School at risk.

Dr Stanley said the proposed tip was between two sections of Arthurs Seat State Park, home to threatened fauna such as the southern brown bandicoot and birds like Lewin’s Rail, white-bellied sea eagle and powerful owl.

It would negatively impact on four threatened flora species in the state park – purple eyebright, clover glycine, green leech-orchid and tall wallaby-grass – as well as many others.

Kathryn Downs, a solicitor, told the meeting that world’s best practice and technology can’t protect people and the environment “if the site is wrong to start with”.

There was a risk of the liner failing and leachate leaking from the quarry if the pumps failed, she said.

EPA guidelines declared that landfills must not leave an unacceptable legacy to the community.

Ms Downs cited the Brookland Greens housing estate in Cranbourne where methane gas leaking from the closed Stevensons Rd landfill had forced people from their homes, devalued property values and cost the cities of Casey and Frankston $13 million and the EPA $10 million in a class action.

“Casey and Frankston are still fighting over the cost,” she said.

Ms Downs told the packed hall: “If you don’t object [to the tip], don’t complain when it goes in.

“Get your kids to write to the EPA and draw pictures because they will cop this.”

She said the matter was guaranteed to end up in the Victorian Civil and Administrative Tribunal.

PPG volunteers had put in hundreds of hours of work.

“We ask you to sign up, donate and get involved.”

The final speaker, Dr John Stanley, said it was a “scandalous project”, the worst he had seen in more than 40 years of involvement in public policy.

There would be healthy and safety risks for the community and damage to the environment.

“No conditions can make this safe,” he said.

“We need to send a strong message to the EPA and ask it to send PWM packing. Mornington Peninsula Shire councillors need the courage to say no.”

Its petition is at: www.communityrun.org/petitions/save-arthurs-seat