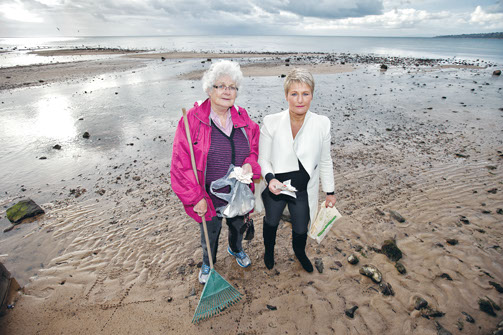 MORNINGTON beaches are being polluted by rubbish from Melbourne.

More than three dozen parking slips came from the cities of Melbourne, Maribyrnong, Darebin and Yarra, revealing the exact time and date the slips were issued.

Several had taken just three days to float from Melbourne to Mornington.

“We don’t normally get needles. We usually pick up one or two needles during Clean Up Australia Day but found none in March,” she said.

Ms Oliver said Mornington Peninsula Shire cleaned the beach with a machine but more rubbish had washed up on Mills Beach after the long weekend.

The beach rubbish is being blamed on recent rain. A storm that crossed Melbourne overnight on 31 May and 1 June dumped more than 100mm of rain on some suburbs.

Hundreds of tonnes of litter and rubbish washed down rivers, creeks and drains into Port Phillip and was blown down the coast by northerly winds.

Ms Oliver said it was wrong that shire ratepayers had to pay to clean up Melbourne rubbish on Mornington beaches.

She sorted the parking ticket slips on her lounge room table before contacting Frankston environmentalist Jim Kerin, who has been campaigning to get councils to install litter traps since 2005.

Dozens of parking ticket slips from the City of Greater Dandenong were in the rubbish collected.

“We had a meeting with Dandenong’s then mayor Peter Brown and Frankston MP Alistair Harkness and convinced the council to spend about $1.5 million on centrifugal litter traps,” he said.

“We’ve seen very little rubbish from Dandenong since then.”

In March, Mr Kerin wrote an opinion piece for The News based on his years of research and lobbying for litter traps.

He stated that a Melbourne City Coun­cil report revealed three billion pieces of litter (about 2000 to 3000 tonnes) was washed into Melbourne’s waterways through stormwater drains each year.

“Most litter in stormwater comes from shopping centres and strips, markets, on-street collections, tips and recycling depots,” he wrote.

“A number of major streams feed the lower Yarra River. Inclusive of the Yarra, they drain Melbourne’s suburban north, northwest and east, and include Maribyrnong and Plenty rivers and Merri, Darebin and Gardiners creeks.

“The streams directly connect to the major underground drains beneath streets and commercial precincts of the north and east to Port Phillip’s central and southern beaches. The main drains and beds and banks of creeks and rivers are managed by Melbourne Water.

“Once this litter leaves the Yarra, it’s carried by Port Phillip’s predominant clockwise currents south to beaches in the municipalities of Bayside, Kingston, Frankston and the Mornington Peninsula.”

He said rivers of garbage can be seen in Port Phillip after significant rain events.

“Each year the four councils spend hundreds of thousands of dollars collecting drift litter from their beaches.”

The rubbish should be stopped by inner city councils and Melbourne Water instead of shifting the cost to bayside councils, he said.

Weather forecaster Alex Zadnik, a former resident of Sorrento now in a senior position with Sydney-based Weatherzone.com, told Radio Port Phillip’s Environment Show on Thursday that Melbourne and southern Victoria was likely to receive above average rain this winter.