Go slow in memory of Jimmy 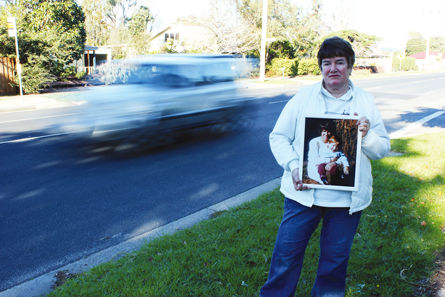 THE letter to the editor in Western Port News (29/5/13) caught the eye of Eve Dellar straight away. The road mentioned is painfully familiar and the topic of the letter even more so.

“Today I received a speeding ticket for doing 64km/h in a 60 zone,” the letter began.

“The camera that detected me was set up in Stony Point Rd, Crib Point, at 5am on a Monday morning. As anyone who has travelled along the section of Stony Point Rd near Symonds St knows, the road is more than twice the width of many roads, it is straight, flat and I have never seen an accident there in all the times I have driven along it. It is obvious the camera was there at that time of the morning to raise revenue.”

Mrs Dellar’s heart sank as she read the words, written by a resident of Crib Point who was upset at receiving a $176 fine.

“My first reaction was anger, then I got upset,” Mrs Dellar said.

Her mind went back to 15 December 1983 when her four-year-old son Jimmy Dellar was hit by a car and killed on Stony Point Rd.

The events of that evening came flooding back.

“It was after dinner. Jimmy asked if he could go outside and play some more and I told him he could, but not to go near the road,” she recalled.

“There is no way of knowing why he tried to cross the road, but he had a little friend who lived on the other side and he went to cross. He looked one way and made sure it was clear but then stepped into the path of a car coming from the other direction.”

What happened next is described by Mrs Dellar as the longest half-hour of her life.

“The bystander who came to Jimmy’s aid kept me away from him. They put a blanket on him, but wouldn’t let me be with him. I guess they thought it was for the best.

“When the paramedic got there he ordered me inside. They began working on Jimmy. The next thing, I heard a terrible scream from the lady who had been driving the car and another scream from my mother-in-law. ‘There is no God!’ was the next thing to come from my mother-in-law’s mouth. I grabbed her and said ‘Please don’t scream like that. There is a God and Jimmy is with him now’, trying to comprehend the horror of what was happening.”

Mrs Dellar is visibly upset when recounting the death of her only son nearly 30 years ago.

“It never leaves me; I think about Jimmy every single day.”

On the night of Jimmy’s death, their house was full of people, many of whom the Dellars had never met, bringing food, comfort and tears for the little boy and his shattered family. Two Uniting Church ministers were there, as was the local Catholic priest. Even now, Mrs Dellar is grateful for the outpouring that night.

The death of Jimmy had a profound effect on the family as well as the car’s driver, who was only 22 at the time.

“It created so many layers of victims. It totally shattered us,” Mrs Dellar said.

Adding to the heartache for Mrs Dellar was the way authorities dealt with the accident and the lack of support for the grief-stricken family.

“As Jimmy was only four, it was like he didn’t matter,” she said

No formal counselling was offered. The Dellars were referred to a local family who also had lost a child, but this was not enough support for the suffering family.

“We were just left to sort it out on our own,” she said.

“I have my Christian faith, which has always sustained me, but it was still terribly difficult.”

The letter in The News prompted Mrs Dellar to speak out about the dangers of speeding cars.

“I just want people to realise that it is not just about revenue raising and to claim so is utterly outrageous,” she said.

“I lived on Stony Point Road for 27 years and the number of accidents that occurred near the front of our home were numerous and mostly very serious.”

Mrs Dellar wants to tell her story to warn others of what happened to her, but also to honour her son.

“I always tell people: you can’t be too careful with your children. Look after them closely and love them every single day. It is so important for children to grow up loved and appreciated.”

Mrs Dellar now lives a quiet life in Somers and her pain is eased a little by the joy of grandchildren. Her daughter, son-in-law and grandchildren still live in the house on Stony Point Rd.

It has changed little in the intervening decades, except for the installation of a large fence, a barrier between playing children and speeding cars.

Jimmy is buried at Crib Point Cemetery, surrounded by family. In a sad twist, his aunt died of cancer just a few months later, and his grandfather and grandmother died within three years.

Back on Stony Point Rd, standing on the spot where Jimmy died, Mrs Dellar smiles.

“I can feel him with me now; I can feel a warmth.”