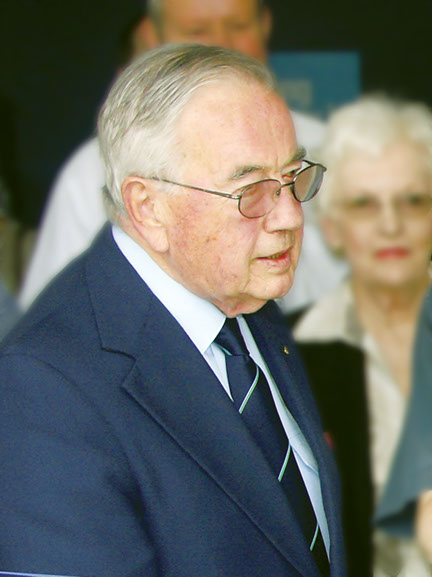 THE protection of Melbourne’s natural environment with Green Wedge Zones was a signature achievement of former Mornington Peninsula MP Alan Hunt, who died in the early hours of Friday morning at age 86.

Mr Hunt, the father of five sons including federal Flinders MP Greg Hunt, his youngest, died at Peninsula Health’s palliative care unit in Frank­ston where he had been for two days after being transferred from Frankston Hospital.

Mr Hunt’s eldest son Bob, 61, drove from southern NSW and arrived at the palliative care unit at about 3am and was with his father at the end.

Greg Hunt said his father lived in his Mornington house until December when he moved to an aged care centre in Somerville.

“Dad retained his complete aware­ness of the world until his last days,” he said. “Over the past few weeks, he said good­bye to each of his sons. In doing so he took care of each of us. He ex­plained that he was ready to die, that he had been blessed in his life and that he had no fears.

“In the past few weeks, he had been given amazing care by the doctors and nurses of Frankston Hospital.”

He was educated in SA and at Mel­bourne Grammar School before attend­ing Melbourne University and gaining a law degree.

He was president of Melbourne Uni­versity Liberals from 1948-50, sec­retary of the National Union of Aus­tralian University Students and a delegate to the World University Ser­vice conference in Bombay in 1950.

He began his career as a solicitor and by 1954 was a senior partner of Frost and Hunt in Mornington, later Hunt, O’Sullivan and Daniels.

He was elected to the Victorian Legis­lative Council (upper house) in 1961 to represent South Eastern Province, which stretched from central Victoria to eastern and southern suburbs as well as the peninsula and Phillip Island.

The province was abolished at the 2006 state election following the Labor go­vern­ment’s reform of the upper house.

Mr Hunt was an MP for 31 years, retiring on 2 October 1992. The seat was won by Ron Bowden, husband of Mornington Peninsula Shire’s mayor Lynn Bowden.

The veteran MP served as a minister in the Bolte, Hamer and Thompson governments.

Between 1971 and 1982, he held the portfolios of local government, planning, federal affairs and education, and was Attorney-General for a brief period in 1976.

He was Leader of the Legislative Coun­cil in government between 1978 and 1982.

Mr Hunt was made a Member of the Order of Australia in 1992.

The funeral of Mr Hunt was on Mon­day at Peninsula Community Theatre in Mornington.

COMMUNITY leaders praised Alan Hunt when they spoke to The News on Friday.

Mornington MP David Morris said Mr Hunt was not only a great parliamentarian but also a great representative of South Eastern Province and in particular the peninsula.

Mr Morris, chairman of the Parliament’s powerful Public Accounts and Estimates Committee and Parliamentary Secretary for Local Government, said he met Mr Hunt in the early 1980s at a Mornington chamber of commerce meeting.

“Alan said there had never been a public policy question where the outcome had not been improved by public input.

“It is advice that has stayed with me for 30 years,” Mr Morris said.

The MP said Mr Hunt “can take a great deal of credit for the distinctive [green] break between the Mornington Peninsula and metropolitan Melbourne”.

Former Mornington MP Robin Cooper said he was sad to hear about the death of Mr Hunt.

“I visited him in Somerville about three weeks ago and we chatted for 25 minutes,” he said.

Mr Cooper said Mr Hunt was “a great supporter of mine” and was always available to provide advice.

“He had a great brain; he was a top bloke and a brilliant parliamentarian.”

Mr Cooper said the Moorooduc Plain had been saved from development by Dick Hamer and Alan Hunt.

He had a lot to do with planning on the peninsula and had helped preserve its uniqueness, she said.

“We have a lot to thank Alan for regarding balanced planning,” she said.

“He was greatly respected and has left us a strong legacy.”

Ron Bowden, who replaced Mr Hunt in the upper house, said it was his privilege to succeed Alan Hunt.

“Alan served the Parliament for many years with high distinction,” he said. “His successes will continue to bring benefits to the peninsula and Victoria.”

‘My Dad had a wonderful life’

THIS is the statement released by Flin­ders federal MP Greg Hunt on Friday morning:

“Overnight my father Alan Hunt passed away. He was 85.

In his words, he had had a wonderful life. He was the father of five sons, Bob, John, Peter, Steve and Greg. He was grandfather to 10 grandchildren, Josephine, Selwyn, Mia, Alan, Anne, Henry, Sam, Abby, Poppy and James. He was the brother of Colin and David. And, to his great delight, for the last decade and more of his life he was partner to Leila Haywood.

Not all endings are sad. Until Decem­ber Dad lived at home, in Mornington, in the house which he had loved and lived in for almost 50 years.

In the past few months he and Leila have been cared for by the wonderful staff at Somercare in Somerville.

In the last few weeks he had been given amazing care by the doctors and nur­ses of Ward 4GS at Frankston Hospital. And in the last two days he was embraced by the most caring staff of the Palliative Care Unit at the Golf Links Rd Rehabilitation Centre in Frank­ston.

Dad retained his complete awareness of the world until his last days. Until the very end he was actually caring for others.

Over the last few weeks he said good­bye to each of his sons. In doing so he took care of each of us.

He said farewell and took care of each of Steve and Peter. Both spent much time with him in his last few weeks.

Yesterday, as he became increasingly frail, his brother David and partner Leila visited to say goodbye.

On his last day he was surrounded by sons who read to him his beloved poems from Yeats and Byron, Shelley and the Prophet.

But his favourites were Tennyson’s Ulysses and perhaps most of all Coleridge’s Kubla Khan. As my brother John read the words “In Xanadu did Kubla Khan a stately pleasure dome decree”, Dad cupped his ears to tell us he was listening, and to ask for more.

But there was one more thing. He had yet to say goodbye to his eldest son Bob.

Bob drove overnight from Wyndham in NSW and arrived just after 3am. There, in the middle of the night, accompanied and cared for by his eldest son, he passed away.

It was a grand life and we will cele­brate it on the Mornington Peninsula, which he so loved, at the Peninsula Community Theatre in Wilsons Road, Mornington, at 3pm on Monday 22 July.

With all our love Dad, the boys.”