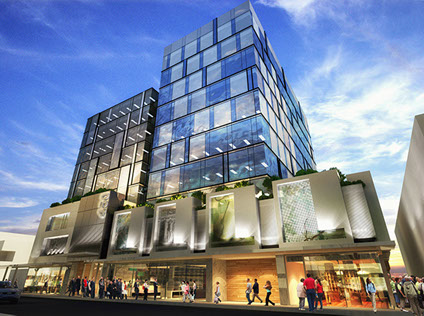 FRANKSTON will get another multi-storey building after the council on Monday night approved an 11-storey complex on the beach side of the Nepean Highway.

The building on land at 446-450 Nepean Highway is currently occupied by Frankston Hi Fi, the Pint and Pickle and the former Sydney’s Furniture store, and will be between McDonald’s restaurant on Wells St and the old cinema complex near Beach St.

The highest part of the building will be a tower 39 metres high. The lift “overrun” will be 41 metres high.

Other parts of the building will be set back from streets and neighbouring buildings.

Proposed by Mt Eliza investor Greg Farmer, the complex will include shops, apartments and offices.

It is opposite the newly revamped 10-storey Peninsula On The Bay, formerly known as the Peninsula Centre.

The building’s footprint will be almost square with a 59-metre frontage to Nepean Highway and stretching west 55 metres to Kananook Creek Boulevard.

The council was set to discuss the project at its meeting of 24 June but it was moved forward a week at the request of Cr Brian Cunial, who said residents and the 47 objectors did not have enough time to consider the plan.

Council planners had initially recommended against approving the project due in part to an objection by VicRoads, which withdrew its opposition a few days before the 24 June meeting, opening the way for council planners to give it the green light.

Against were councillors James Dooley, Glenn Aitken and Brian Cunial.

Cr Cunial said he liked the design of 450 but “struggled with its height”.

“I accept it will bring economic benefit to Frankston but it doesn’t make sense to have tall buildings near the bay and beach,” he said.

Number 450 Nepean Highway, as it is labelled in plans, will have:

a cafe of 87 square metres.

four apartments each with two bedrooms.

A lift from the basement with parking for 84 cars and eight motorbikes.

The building will have a ground floor, mezzanine, two “podium” levels and seven levels in the tower including a “winter garden” on the top level.

Greg Farmer, speaking from overseas, told The Times he was “very pleased and very excited” the proposal had been approved after three years of planning.

Including land price and holding expenses, the project would cost about $50 million, he said.

It would have a significant economic benefit for Frankston.

He hoped a proposal to turn this part of Nepean Highway into a boulevard with wider footpaths and narrower roads would revitalise the precinct.

Mr Farmer said the council had forecast that up to 1000 people would shop and work in the new building.