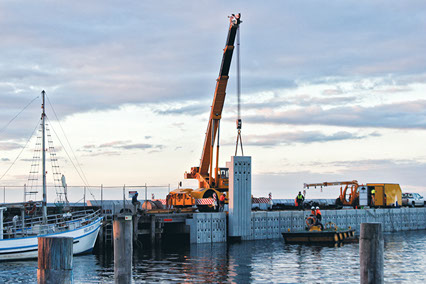 Completion of installation is a significant event in the long-running saga to make the harbour safe from westerly and northerly storms.

Carrum Downs-based K V Johnson Constructions started installing the panels – 43 on the outside of the pier and 31 on the inside – in late June.

Made in Geelong, they weigh about 15 tonnes each, are 700mm thick and were lifted into place by crane and bolted on to the 53-metre section of the pier that was built between August 2010 and September 2011 at a cost of $3.6 million.

Wave screens were meant to be installed as part of the rebuild but the project was more expensive than expected and the state government, through it agency Parks Victoria, had to find more money for the screens. The screens are costing $1.5 million

Work still to be done in the next three weeks includes grouting between the panels, installing hardwood panels on the inside to protect moored boats, and installing 11 bollards for boats.

The project is on schedule despite the contractor losing an average of two days a week due to bad weather.

A diving team of four has been attaching the panels below the waterline, the most demanding part of the job. Divers were not able to work when the swell was too big.

Meanwhile, design work continues on the replacement of the outer, 75-metre part of the pier, a version of which has existed for more than 150 years.

A contractor has been test drilling to gauge the depth that pylons will need to be sunk into the sea floor.

In May, Graeme Davis, Parks Victoria’s chief ranger for Port Phillip and Western Port, said work to replace the outer section would likely start in August and be completed by late 2014.

The News understands work will not start this month.

This stage will cost about $13.5 million and will include wave screens on both sides.

Mornington Yacht Club’s Kevin Donnellan said the new pier and its wave screens would protect about 70 per cent of the harbour.

Providing 100 per cent protection will require the construction of a new “arm” connected to the end of the existing pier.

There is no money budgeted for this and how and exactly where it will be constructed remains up in the air.