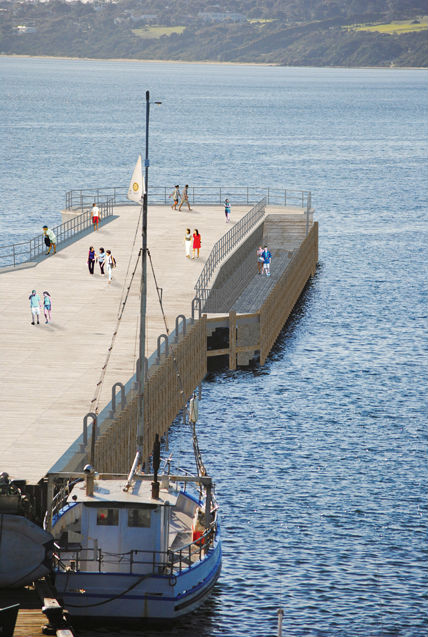 THE state government has called for tenders to replace the condemned, outside section of Mornington pier.

Replacement of the 75-metre long section will cost at least $13.5 million, allocated by the government last year.

Work is expected to start later this year and be completed in late 2014, subject to weather and contractor avail­­ability.

The value of the project is likely to see pier contractors from far and wide submit tenders.

Mornington MP David Morris said the design for the outer section and wave protection would ensure “this iconic pier will continue to provide a destination for the residents and visitors to Mornington for many years”.

The last of 74 concrete wave panels was fitted to the rebuilt middle section on Thursday 1 August (“Pier wave panels installed”, The News, 6/8/13).

“With those works complete, we are now able to progress the final stage of the Mornington pier upgrade, which includes rebuilding the outer section of the pier, wave screens and low landing,” Mr Morris said.

Minister for Ports David Hodgett said it was great to see the project moving to the next stage.

Parks Victoria said the new section would “remain on its historical alignment and have a timber deck supported by steel piles and concrete sub-structure”.

“The northern side of the pier has, in part, been stepped back in response to site conditions – rock placed on the sea floor in years gone by,” a spokesman said.

“Wave screen panels will be similar to those installed on the middle section. The pier deck ramps up about level with the top of the wave screen panels, with the effect of maintaining views across Port Phillip.

“A low landing, sitting 1.5 metres above low tide level, will improve access for boats using the pier and [enable] divers to access under the pier.

“A gentle ramp will connect the low level landing with the pier, complying with design accessibility standards.”

Ladders would be fitted on the harbour side as well as seats, lights, signs about the pier’s history and a navigation light near the end of the pier.

Iron stone paving at the start of the pier would be repaired.

Contractors have been test drilling near the end of the pier to ascertain the depth piles will need to be pushed into the seabed.

The News understands piles will be up to 40 metres long.

Earlier this year, Mornington Yacht Club’s Kevin Donnellan said the new pier and its wave screens would protect about 70 per cent of the harbour.

Providing 100 per cent protection would require the construction of a new “arm” connected to the end of the existing pier, a version of which has existed for more than 150 years.

There is no money budgeted for this and how and exactly where it will be constructed remains undecided.

The yacht club has been trying for more than 30 years to make the harbour safe from northerly storms.