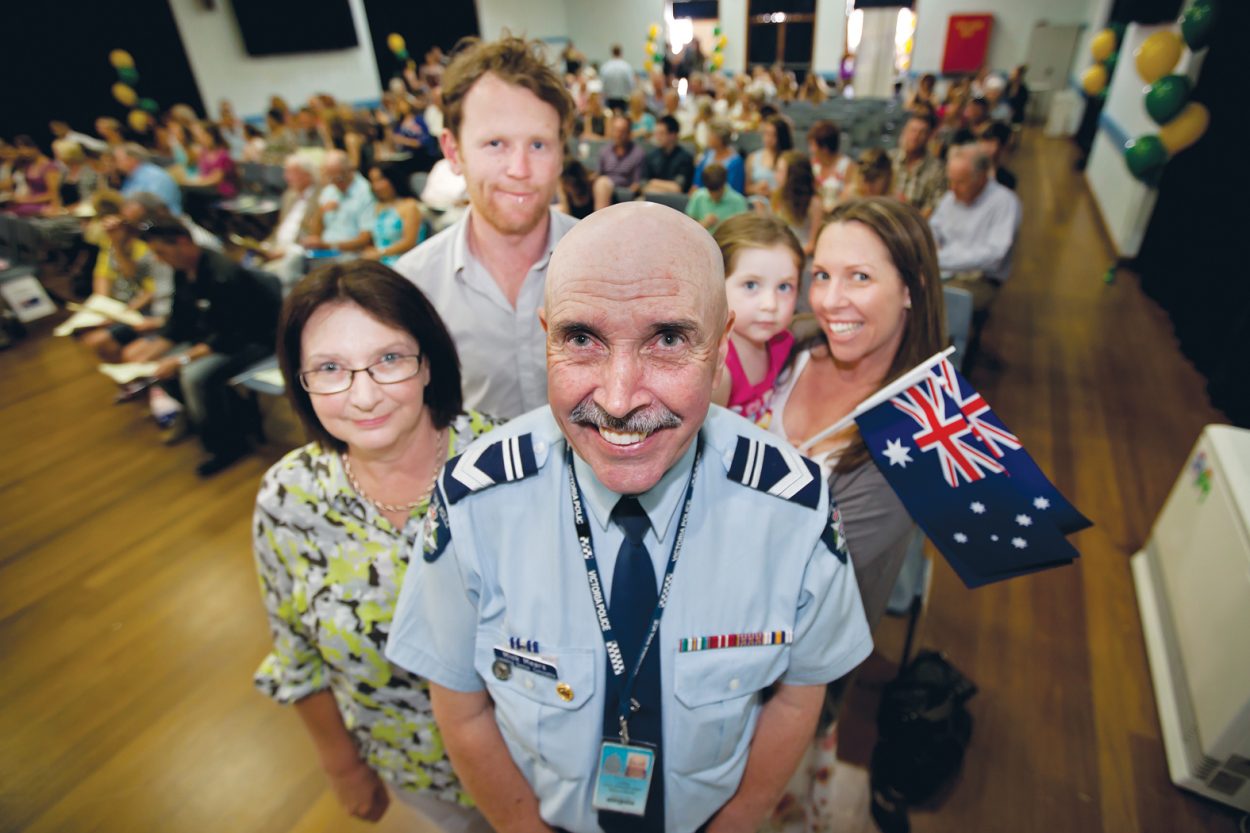 LEADING Senior Constable Mick Mears is no stranger to receiving accolades and awards for his decades of work as a youth resource officer with Victoria Police.

But this still didn’t prepare him for the “shock” of being named Mornington Peninsula Shire’s 2014 Citizen of the Year on Australia Day at Rosebud.

The 67-year-old veteran police officer is now into his 44th year with the force and has been based at Mornington since 1980 where he has dedicated himself to working with peninsula schools and young people.

Affectionately known as Constable Mick, the former army reserve drummer has earned much praise for his work in recent years with the Police Drum Corps at Mornington Secondary College.

In the seven years since its inception, the corps has grown in reputation and stature, performing at hundreds of events around the country and receiving countless commendations and awards, including the NAB Schools Impact Award and the Order of Australia Association best in show in Australia Day marches award.

But his work with the band is just one of the many programs Leading Senior Constable Mears has been involved with. He is currently working with 10 youth programs across the peninsula.

He said being named citizen of the year had come as a “huge surprise”.

“I didn’t even know I had been nominated so it was a complete shock when I found out,” he said.

“I’ve been fortunate enough to receive a couple of awards over the years but nothing like this. It’s a wonderful surprise and a great honour. “When you work with the community, you do it to help, not for awards. The work really is its own reward, so you never expect to receive an honour like this.”

Also honoured at the ceremony was the shire’s 2014 Young Citizen of the Year, Timothy Thomaidis, while Hastings Community House won the award for Community Event of the Year for it’s World Record Snake Day.

Mayor Antonella Celi said the awards aimed to honour the people and events that had made a significant contributions to the Mornington Peninsula community.

“We are really very lucky to have such wonderful people and events that help make the Mornington Peninsula the special place that it is for all of our residents and visitors,” Cr Celi said. “These extraordinary citizens and the event have been nominated by members of our community because of their dedicated contribution to social and community development on the Mornington Peninsula.

“The nominations for awards were of a very high standard, and it’s so pleasing that we are able to formally recognise the contributions of Mick, Timothy and the Hastings Community House World Record Snake Day with these awards.”