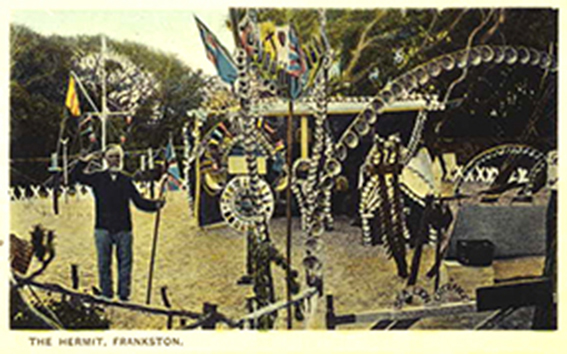 ONE of Frankston’s most colourful personalities at the turn of last century was an unlikely celebrity who sought obscurity in a hermit’s existence.

According to stories circulating at the time, his exile was a self-imposed penance for sins committed during his wayward youth.

But this did not stop people from all over Melbourne seeking him out and dining out on stories of having met the “Frankston Hermit”, as he became known.

One has to wonder if the hermit was entirely genuine in his desire for solitude; his camp on the foreshore between Frankston and Carrum was not especially hard to find, colourfully ornamented as it was and with decorated paths leading towards it.

According to local lore, he was determinedly reclusive in the first years of his 12-year tenancy, but later came to terms with his unsolicited fame and over the years received hundreds of sightseers, including a wedding party of 50 from Chelsea who toured the “hermitage”, as it was known, between the wedding ceremony and the celebratory breakfast.

Photographs of his camp show a fenced and gaily bedecked plot in a ti-tree clearing. In addition to the nautical-themed bark roof hut in which he slept, it had a lookout with a large viewing platform, numerous monuments and sculptures, all elaborately festooned with shells and other treasures of the sea.
The entrance to his little patch of paradise had a bower with a sign warning, “Blasphemers not allowed in here”.

Today, hemmed in as we are by neighbours, shops and noisy roads, the idea of carving out a piece of prime real estate on the (then) lonely beach front has its attractions, but it was not an easy life chosen by the hermit.

He steadfastly refused offers of charity and scraped a living selling carvings fashioned of cuttlefish bones and the occasional odd job offered by residents. He claimed that in one dire period he was without food for nine days, a situation remedied when he sold some carvings in Frankston and was able to buy a loaf of bread.

Many stories circulated about the hermit’s strange ways. It was said he had survived a shipwreck in which many of his passengers and crew died. During storms he would sit in his lookout shouting orders to an imaginary crew.

The Argus newspaper reported: “Every day at 9am and 4pm he used to call the birds and hundreds of birds of all sort would fly around him while he fed them.”

His habit of quoting from the scriptures added to the mythology of the hermit as the repentant anti-hero, as did his allusions to past “tribulations” and a fatalistic acceptance of his lot.

It was not until 1911 when he was hospitalised with heart troubles that he was revealed to be a former ship’s captain, John Maddox.

Vexed at being “outed”, he nonetheless consented to be interviewed by The Herald.

“I’ve had my tribulations and I know they have been visited on me for some good purpose by an all-wise providence,” he told the reporter.

“I thought that I would keep my name to myself, but I have been unable to do so. Policemen, detectives and lots of other people have tried to find out what it was, but without success. Eleven years ago I stamped it out, but now that it has come out, there are many people in Melbourne who will remember John Maddox who knew him not as the hermit.”

Maddox hailed from Swansea in Wales and had captained the Mary Moore to Australia. He appears to have been one of several brothers who all had maritime careers and there is an account of one well-to-do brother seeking him out at this camp and trying to persuade him to return to society, an appeal that fell on deaf ears.

Whatever his past misdemeanours, they were never revealed by Maddox, but a court mention in the Sydney Morning Herald of Saturday 12 June 1897 contains a hint of a wild past: “At the Newcastle Police Court today Captain Maddock, of the barque Mary Moore, was fined two pound and one guinea professional costs, in addition to costs of Court, for having assaulted John Webber, boatswain of the barque.”

He appears to have lived a blameless, if eccentric, retirement among the ti-tree at Seaford and the folk of Frankston regarded him with much affection.

It was with sadness that the Mornington Standard of 24 November 1917 reported: “Residents of Frankston and district will be sorry to learn that ‘The Hermit’ has been removed to the Melbourne Hospital. On Sunday last, Dr Maxwell, hearing that the old man was ill, visited the camp and found him suffering from heart trouble.”

The hermit died of heart failure a short time later and was unable to remonstrate when public donations were collected to pay for his funeral. He was about 71.

Despite appeals to both Dandenong and Frankston councils to preserve the “Hermitage”, Maddox’s camp quickly fell into disrepair.

In April, Frankston Council agreed to protect the camp but it was destroyed by suspected vandals.

Today, the hermit is remembered at a picnic area on the foreshore at Seaford, where a sculptural “folly” honours his unique place in the community.