Down to the sea go three 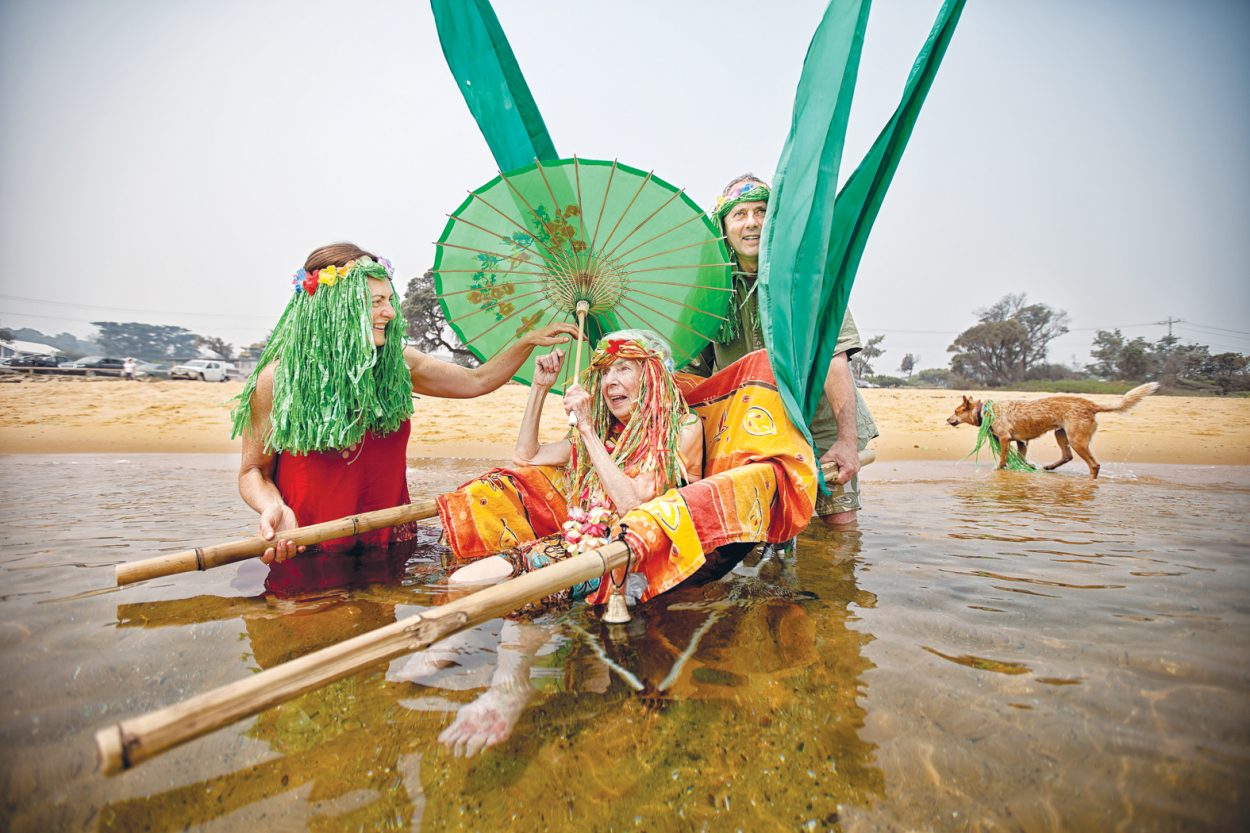 AUTHOR and therapist Bernadette Hoey celebrated her 80th birthday last week by taking a dip at Mt Martha in a seagrass palanquin, the Eastern version of a sedan chair.

It was made for her by peninsula puppeteer Ian Cuming who, with Mornington author and world renowned shakuhatchi flute player Anne Norman, joined Ms Hoey for her birthday.

“Anne and I wanted to do something special for Bernadette so we arranged a beach picnic. She’s a very dear friend and mentor,” Mr Cuming said.

“We can so easily forget the wisdom carried by our elders,” said Ms Norman, whose busy schedule of national and international touring has been on hold for the summer while she works on her children’s novel about the sea.

“Bernadette has helped so many people through her work as a therapist. We really wanted to let her know how special she is to us all.”

Over a picnic lunch of salads with marinated tofu, under the shade of an old banksia tree, Ms Norman recited poems from her novel.

Her sculpture Sacred Fire, made from a tea tree branch washed up on a Mornington beach, stood nearby.

Later, Ms Norman played her haunting shakuhatchi to the steady heartbeat rhythm of Ms Hoey’s hoop drum. “We’ve all been mates for many years,” said Ms Hoey as she was carried across the beach to the sea on the palanquin.

“From time to time, we’ve been known to get quite playful. We all share a love of the absurd and a capacity to be spontaneous.”

Ms Hoey’s first book, Who Calls the Tune – A Psychodramatic Approach to Child Therapy, (Routledge, 1997), explains how the powerful techniques of Jacob Moreno’s psychodrama method can be safely used to help troubled children.

In the book of case studies, child and therapist enter together into a world of play, using puppets to facilitate spontaneous interactions and role playing.

Mr Cuming, who recently completed a post-graduate certificate in creative arts therapy, is researching the cultural value of wetlands at Victorian College of the Arts.

“I thought we were just going to the water’s edge for a dipping of toes but at Bernadette’s insistence, and before I had time to wimp out, we were in up to our necks,” he said with a grin.

Last year Mr Cuming and Ms Hoey conducted a workshop for the Dance Family, a group of children with autistic spectrum disorders.

“My work really never stops,” Ms Hoey said. “There’s always more to be done. After this wonderful mayhem, I really just want to get straight back to work on my next book. It takes quite a long time to write a good book.”

The three friends left the beach and went to a cafe where Ms Hoey produced a treasured book, My Family and Other Animals by Gerald Durrell. With a wistful look in her eye she read: “When you’re as old as I am, you’ll probably be able to hear flowers talking, that’s if you retain an open mind about such things – all the old people I know have had their minds locked up like grey scaly oysters since they were in their teens”.

For anyone working creatively with children, Who Calls the Tune is available on Amazon and at public libraries.