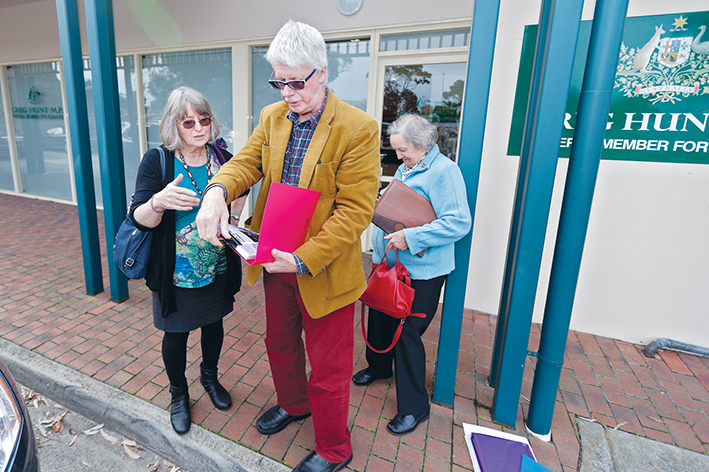 The human rights group has demanded the government respond to its report on “cruel and humiliating” conditions at the Manus Island detention centre detailed by Amnesty International investigators who visited the Papua New Guinea facility late last year.

The trio and other volunteers gathered more than 500 signatures at Mornington market for petitions to be handed to Mr Hunt and fellow Liberal MP and member for Dunkley Bruce Billson (‘Petition brings asylum seekers home to MPs’, The News, 15/4/14).

Mr Bain said a lot of people are angry and disappointed at successive governments’ policy of “demonising” asylum seekers.

“We wanted to tell Mr Hunt that many people in Australia are crying out for leaders with long-term vision rather than those who use asylum seekers as a target for short-term political gain.”

He told The News Mr Hunt had questioned whether Amnesty International had pursued the previous Labor administration as vigorously on the contentious issue as the current Liberal and National Party coalition government.

“Amnesty International is a non-political organisation and has tried to hold successive governments to account for their disgraceful treatment of those fleeing prosecution in other countries,” Mr Bain said.

Mr Hunt told Mr Bain he had read the Amnesty report about conditions at Manus Island and “had promised to pass the petition on to immigration minister Scott Morrison”.

Mr Bain said Mr Hunt had committed to seek an official government response to the petition.

Mr Hunt released a statement to The News after the meeting stating “constructive feedback on how offshore processing could be improved was welcomed by the government”.

He said the previous Labor government’s “failure on our borders” had led to more than 50,000 people arriving on more than 800 boats, with more than 1100 people known to have drowned at sea.

“Offshore processing in Nauru and Papua New Guinea is one part of a range of measures being used to stop the people smuggling trade and prevent further illegal maritime arrivals to Australia,” he said.

Mr Hunt said the government had made a number of improvements at the Manus Island and Nauru facilities since winning government in September last year.

“All people transferred and accommodated at an offshore processing centre are treated with dignity and respect and in accordance with human rights standards,” Mr Hunt said.

In February this year several asylum seekers detained at Manus Island were injured during unrest inside the confines of the detention centre.

A 23-year-old Iranian man, Reza Berati, was murdered during riots at the centre and a PNG police investigation has failed to identify the culprits amid allegations PNG guards hired by contractor Transfield on behalf of the Australian government were involved.

Transfield is paid more than $61 million per month by the Australian government to manage the Manus Island detention centre, and replaced previous contractor G4S in February after the riots.

Refugees at Manus Island have accused G4S security guards of attacking them with rocks and iron bars during the February night of violence at the detention centre.