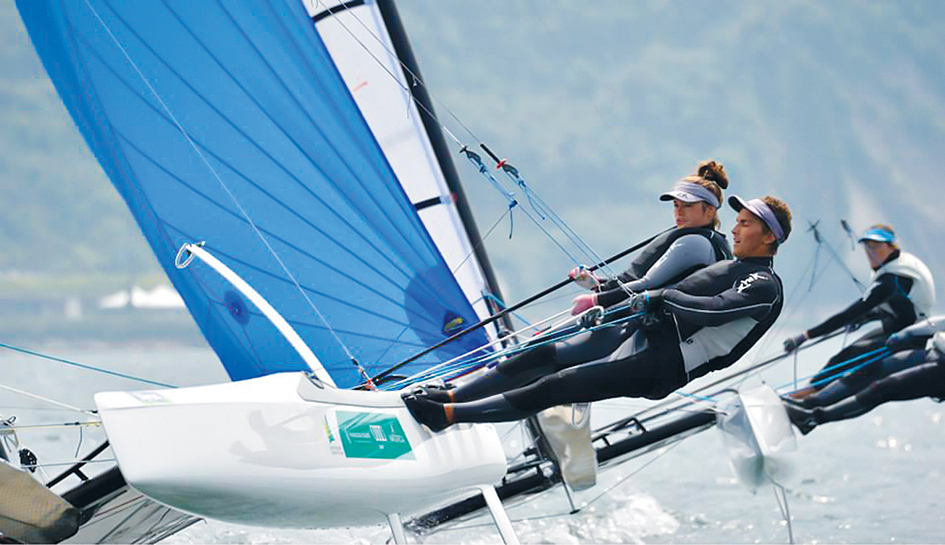 YOUNG Mornington Peninsula sailors Pip Pietromonaco and James Wierzbowski recently set sail for Europe as part of the Australian Sailing Team after being selected to represent their country at the 2016 Rio Olympics.

Pietromonaco, 22, from the Westernport Yacht Club and Wierzbowski, also 22, from Merricks Yacht Club, learned in March they had won places on the 15-member national Olympic sailing team and are now competing in a full itinerary of international events across Europe. The long-time stars of peninsula sailing are competing together in the new discipline of Mixed Multihull in the fastest Olympic sailing class, the Nacra 17.

Wierzbowski told The News it was a “long road to Rio” but after training on the waters of Western Port through countless winters, he and Pietromonaco were looking forward to the opportunity to compete against the world’s best on the Olympic Sailing Circuit.

They are currently training on Lake Garda in the Italian Alps after last month finishing in the top 20 in their class at the Sailing World Cup in France.

That result follows an already highly successful 2014, with the duo winning their first National Championship and gaining selection into the Australian Sailing Squad and Victorian Institute of Sport.

Over the next four months, the pair will continue training and competing in Europe with the rest of the Australian Sailing Team in the lead up to the year’s main international event: the ISAF Sailing World Championships off Santander, Spain, at the end of September.

Wierzbowski said that while their recent success had enabled them to access “a small amount of government funding” they still relied on support from the peninsula community to help them realise their dream of Olympic glory.