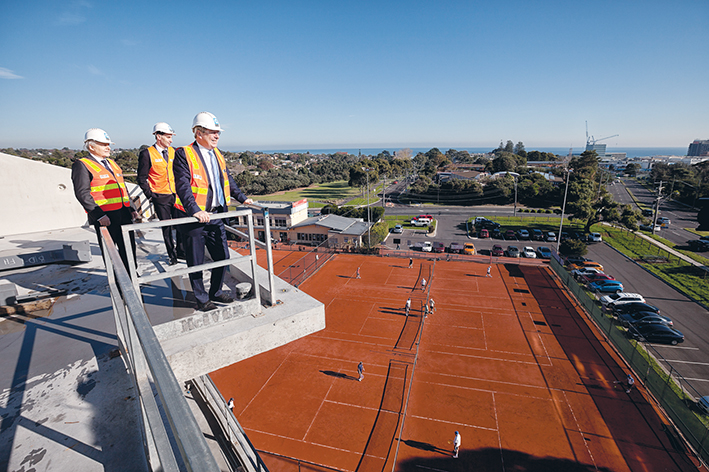 THE new emergency department at the revamped Frankston hospital will be three times the size of the old one with three new wards.

It was of special interest to Health Minister David Davis who last week inspected the four-storey hospital redevelopment due to be completed next year. The $80.9 million works are said to be ‘’on time and on budget’’.

Standing on top of the building Mr Davis said: “The Frankston Hospital Emergency Department is one of the busiest in the state with close to 60,000 attendees each year, and this expansion will help meet that demand.”

The department will have its own ambulance entry point – which is desperately needed as Frankston has the largest number of ambulance arrivals in the state.

Ambulance transfer times have improved with 86.3 per cent of transfers completed within the 40-minute target this year – up from 58.9 per cent in March last year. They are expected to improve with the new development.

The new emergency department will have dedicated paediatric, mental health, medical imaging with a CT scanner, and specialist treatment areas, including women’s health.

But, while the hospital redevelopment may be good news for the minister, state government concerns that the federal Budget will rip $200 million out of health and education from July 1 must be galling.

This includes the $7 co-payment to visit a GP – which may push more people into public hospital emergency rooms with the states footing the bill and higher co-payments for medicines.

“There are immediate and significant impacts on the Victorian budget on health, concessions and potentially education,” Dr Napthine told the ABC on Wednesday.

Peninsula residents will certainly be affected by the cuts. But Peninsula Health says that, at this point, it is too early to tell what direct impacts the Budget will have locally.

“State and federal governments are currently in negotiations and we expect that we will receive a response from them in the coming weeks. Whatever the result Peninsula Health will continue to provide the best care possible for our patients whilst working within the means we have.”

According to Plan Melbourne, Health is the largest single source of employment in Victoria, providing more than 330,000 jobs in 2010–11. The health and social services sector is one of the largest contributors to the state’s economy, and contributes $2.5 billion to export earnings.

Emma King, CEO of VCOSS, said changes to Medicare, including the introduction of a fee for people see their GP, will make it harder for people to get the healthcare they need when they need it – particularly in rural and regional areas where access to healthcare can already be limited.”

“The new co-payment of $7 for each visit to a GP or to use of out-of-hospital pathology or diagnostic imaging services will stop poorer people from going to the doctor,’’ she said.

“It was surprising to see that patients with concession cards and children aged under 16 will have to pay the fee for the first 10 services in each year, up to a total of $70.”

She said the introduction of Pharmaceutical Benefits Scheme co-payments and safety net thresholds would make medicines more expensive. “For most patients the cost of medicine will rise by $5 to $42.70 and people with concession cards will see an increase of 80c to $6.90.”

Ms King said the effect of limiting access to health care – especially for people who are already disadvantaged – was a “step backward and will hurt many people across the community’’.

“These changes will have a big impact on struggling families who are already having to choose between taking their children to the doctor and putting food on the table. This means more Australians will wait until they are much sicker before they seek the medical care they need.”

However, Health Minister Peter Dutton said on the ABC’s 7.30 program that references to Budget cuts in health funding were wrong. He said there would be a 9 per cent increase, year on year, in hospital funding reducing to 6.7 per cent from 2017.

He disputed claims that the government was “taking $8.6 billion from the health budget’’ and that incentive payments – to ease waiting lists for elective surgery in public hospitals and improve the flow of patients through emergency departments – were not “gone’’.

He said cuts would only occur “only if the states don’t achieve a certain level of activity, if they don’t have population growth in accord with the agreement brokered by (former) Prime Minister Julia Gillard.