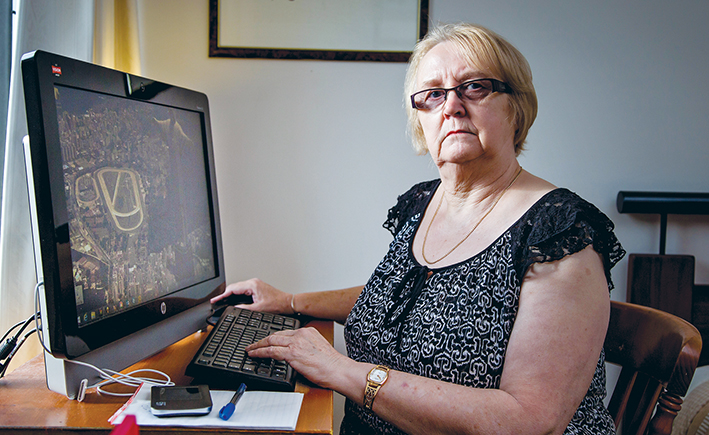 A FRANKSTON South retiree has been left homeless and heartbroken after being swindled out of her life savings in a sophisticated online love scam.

Carole Ross, 64, lost more than $200,000, including all of her superannuation savings, after being duped by a “love interest” she met through an online dating website.

“This has destroyed me,” Ms Ross said. “I’m emotionally distraught and financially ruined; I’ve lost my home, all my retirement savings, and my car is about to be repossessed. My life is ruined.”

While well aware of the dangers of online dating and romance scams, Ms Ross never thought for a moment that her new found “soul mate” had been anything but real.

After all, they’d shared an intensely passionate relationship over almost ten months, melding their futures – and finances – together in preparation of a promised “ever after”.

Wedding bells were in the offing, the culmination of a whirlwind, fairtale romance that was set to fulfill the recently retired health care worker’s deepest longings.

Not only was “Alex” attractive and considerably younger than Ms Ross, he was also very well off. She would never have to worry about money again.

“If only I could have my time over again,” Ms Ross said. “It’s so obvious now that it was too good be true, but when you’re in the middle it, of all this passion and excitement, you don’t stop to think that it could be anything but real.”

The saga began last August when a friend suggested she try to get back into the dating game by signing up to a dating website.

She’d been separated for many years and was soon to retire from her long-term job with Peninsula Health’s Mt Eliza Centre to a life of “relative comfort”. A loving relationship was the one missing element in her life.

After putting up her online profile, it wasn’t long before she received a response from prospective suiter, a “well educated, sophisticated gentleman” who claimed to live in London.

They had much in common and plenty to talk about, especially with her being from England originally.They even shared a mutual friend – the same person who’d suggested Ms Ross try the website.

“We’d talk every day – twice a day – on the phone,” she said. “We’d talk about everything. He was very sophisticated, well-educated and well-spoken.

“We had a real connection and things quickly became more and more romantic.It was passionate and exciting. I told him things I’d never told another soul. I really thought he was the one.”

“He told me he had a young son but his wife had died in a car accident about five years ago. He’d been devastated by her death and it had taken until now to be emotionally ready to try dating again.”

Their relationship grew steadily deeper and Alex soon committed to moving out to Australia to be with her.

She had finally found “the one” just in time to ensure her golden years truly were everything she had dreamed of.

“He told me how he couldn’t believe he’d met someone like me, that he’d never met anyone like me before and that I was the person he was looking for. It was a whirlwind romance, very passionate, and I never suspected it was anything but true love.”

“It was like a fairy tale and I was head over heels in love with this person, whoever he was.”

With more than enough money for them to both live comfortably ever after together, Alex convinced Ms Ross to leave her job so she could concentrate her time and energy on getting everything ready for his impending arrival in Australia.

That meant she was able to release her superannuation savings, which she planned to live off until he joined her.

The date of his planned departure kept being delayed as one problem after another struck.

Then there was a “big business deal” that needed to be completed before he could join her, a lucrative transaction involving a shipment of cars for a fleet buyer in Ukraine.

He had to travel to the troubled country to seal the deal.

But as a sign of his commitment to Ms Ross, and to assist in him resettle in Australia, the payment for the deal would be put into a bank account set up in her name.

There was even an online banking site showing the amount of $990,000 assigned to Ms Carole Ross. Of course she couldn’t access it – yet.

Then everything fell apart. “Corrupt” Ukranian police officers were demanding bribes (could she help, please, as he was able to access his own money). She’d need to wire him $6000, then $10,000 then another $10,000.

Then she was informed by a “lawyer” that Alex was in jail after an altercation with another corrupt official. There were more legal payments and fines she’d have to pay to help him get out.

Then further expenses appeared, this time tied up with the business deal in the form of official government taxes and fees on the bank transfer.

As it was now “her” money – how could she not but agree to pay up or risk losing it all.

Of course it was her fault the fee was being applied as she hadn’t sent enough money fast enough. If she didn’t pay, they’d never see their big pay day.

In desperation, Ms Ross turned to a financial adviser to try to raise the required funds. It didn’t take the business and banking expert long to smell a rat.

A bit of digging revealed the image of “Alex” was a well known profile used in multiple international scams, a stolen identity now being peddled by numerous scammers.

Despite confronting him, Alex still insists everything is legitimate.

She is the one who screwed everything up by not handing over the rest of the money. And he’s the one who’s heart is broken.

And there’s still a chance everything will work out, if only she can come up with the rest of the money. If only.

“It’s horrible realising you have been deceived,” Ms Ross said. “I still find myself wondering ‘what if he is telling the truth’ but then I catch myself and realise how crazy that is.”

“I never thought anyone would be able to scam me like this, but this just shows, it can happen to anyone.”