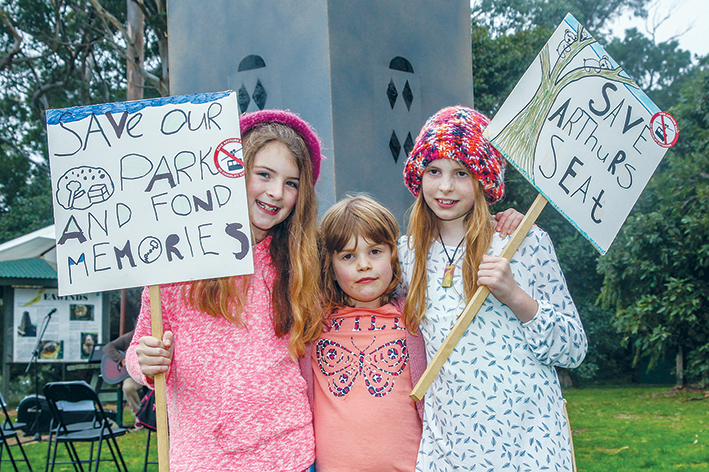 CONTROVERSIAL plans to build a new chairlift at Arthurs Seat have been given the go ahead by Mornington Peninsula Shire after councillors narrowly voted in favour on the planning permit application.

About 60 people opposed to the $14 million Skylift gondola project gathered at Arthurs Seat the weekend before the decision was made but protest and song failed to persuade the majority of councillors to vote against the proposal.

Dozens of objectors filled the public gallery at last week’s council meeting and passions ran high as some voiced their displeasure at the prospect of the Skylift consortium’s bid to build the new chairlift becoming reality.

Save Our Seat group member Matthew Bisogni told The News that he believed the council meeting was “a waste of time”.

“Everyone knew what was going to happen and I’m angry that there’s been so little regard for Arthurs Seats residents by councillors who are supposed to represent the community,” he said.

“We would have been happy to accept a new chairlift that was the same size as the previous one, but – once again – the ‘little person’ and the residents have been screwed.”

Mr Bisogni questioned the need for the larger Skylift chairlift operation with a scope larger than the previous attraction’s footprint.

“This [Skylift] is not the same thing at all,” he said.

“If people don’t wake up and realise this now then by the time it’s built it will be too late.”

He said objectors were now assessing their legal options and may launch an appeal against council’s decision that could be heard at VCAT.

Arthurs Seat SkyLift Pty Ltd head Simon McKeon acknowledged the chairlift application process was not over when he spoke to The News.

“It’s taken six or seven years to get to this point and the vote at council was another stage in the process,” he said.

“The big thing that I was really happy about was seeing the comprehensive report prepared by council officers and other experts.”

Mr McKeon, a Macquarie Bank investment banker and 2011 Australian of the Year for his philanthropic work, said he had never “hidden the fact this [Skylift] will have an effect on some residents” but he hoped – in time – they would respect “the overall outcome”.

“So many people were very saddened when the original chairlift had to shut down and yet there were objections to that project when it was first suggested back in the 1950s.”

He said the consortium had worked with Parks Victoria to ensure the Skylift caused as little disruption to native flora and fauna as possible.

Mr McKeon said the Skylift project had been scaled back from its original design and this made it a less lucrative proposition for the consortium.

“People say I’ll lose money on this and they may be right, but I hope I don’t,” he said.

Asked whether he had ever considered walking away from the Skylift project, Mr McKeon said he thought about doing so “every day” but said he was determined “to bring a much-missed tourist attraction back to the peninsula”.