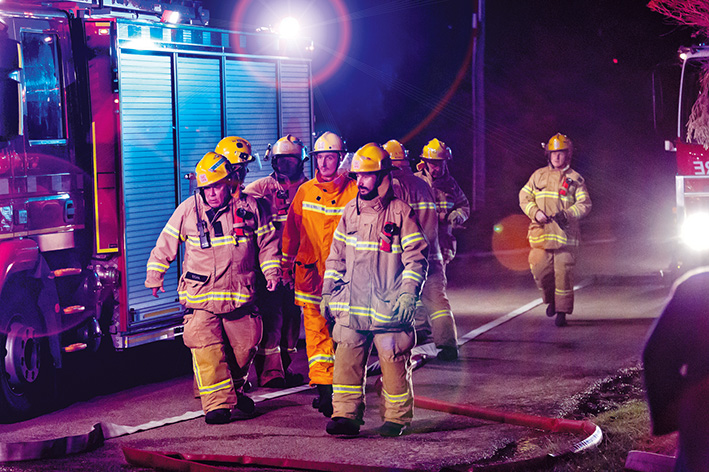 Lucky escape: Firefighters praised the actions of an 88-year-old Rosebud man who helped rescue his 77-year-old neighbour from a house fire in Fourth Ave on 7 May. The potentially deadly blaze was 70 residential fires CFA District 8 fire crews so far this year, four of which have claimed lives. Pictures: Yanni
Share
Facebook Twitter LinkedIn Pinterest Email

THE Country Fire Authority has warned Mornington Peninsula residents of the heightened dangers of house fires during the cooler months following a spate of deadly blazes across Melbourne’s south-east.

There have been four fatal house fires so far this year compared to just two at the same time last year in the CFA’s District 8 region, which takes in the peninsula, Frankston and Melbourne’s bayside suburbs.

CFA District 8 operations manager Trevor Owen said that while the coroner was still examining the causes of the deadly fires, residents need to be vigilant of potential fire hazards.

“Tragically four people have lost their lives and many more have been injured in home fires this year,” he said. “We are extremely concerned about these figures especially as the danger period, winter, is only just beginning.”

In just five months from 1 January to 31 May, 70 residential fires have been attended by CFA District 8 fire crews.

There have now been more fatalities from house fires across Victoria since the start of the year than for the whole of 2013, with 10 deaths so far in 2014 compared to eight deaths in 2013.

The single biggest cause of house fires was leaving items such as electrical appliances, candles or cooking unattended, Mr Owen said.

A working fire alarm was the single most important element in saving lives, he added.

“Don’t forget to check on older relatives, neighbours, or friends who may need help checking their smoke alarm or developing an escape plan,” Mr Owen said.

As temperatures continue to drop, more people will be firing up their wood heaters, using clothes dryers and turning on electric blankets to stay warm, he said.

“There are simple steps people can take to protect themselves to avoid a tragedy. These include making sure heaters are properly checked and maintained, chimneys are cleaned, and power boards are not overloaded.

“Ensure your home has a working smoke alarm, keep your clothing at least a metre away from heaters, and never smoke in bed.”

Another danger area is the kitchen. Of the 1897 residential fires in regional Victoria last year, 37 per cent started in the kitchen.

“The most important message this winter is to take action – it’s simple and can save your life.”

An elderly Rosebud woman was lucky not to have been added to the toll after being rescued by an 88 year-old neighbour when fire engulfed her home.

Firefighters praised the actions of the elderly man who helped rescue his 77-year-old neighbour from her Fourth Ave bungalow.

Five CFA trucks were called to the one-bedroom dwelling just before 9pm on 7 May.

District 8 Operations Officer Paul Carrigg said the bungalow was extensively damaged by the fire and the woman was lucky to have escaped.

“There’s no doubt that the quick action of the man to alert his neighbour may have saved her life and prevented her from injury,” he said.

The 88-year-old man was treated at the scene by paramedics and the 77-year-old woman was taken to hospital for observation.

The cause of the fire is being investigated but it’s believed to have started in the bedroom area.

“This is timely reminder ahead of the winter period for all Victorians to ensure their heaters and electrical appliances are all serviced regularly and checked for safety, and candles should never be left unsupervised,” Mr Carrigg said.