Belle goes above and beyond in new role 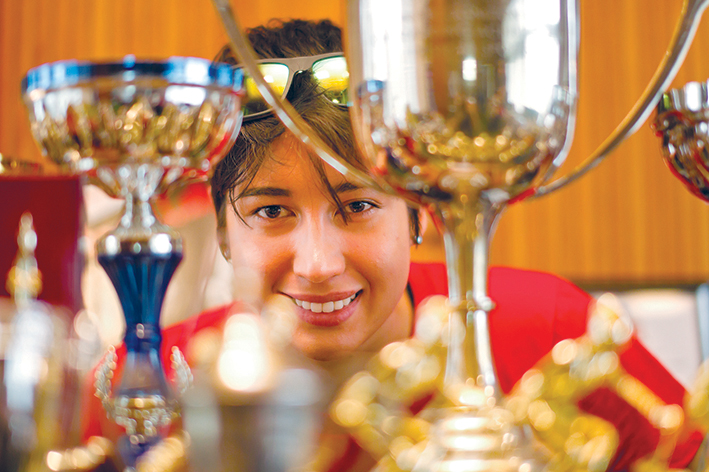 On board: Belle Brockhoff, who was the only openly gay member of the Australian team at the Sochi Winter Olympics earlier this year and spoke out against Russia’s anti-gay laws, has been appointed a beyondblue ambassador. Picture: Yanni
Share
Facebook Twitter LinkedIn Pinterest Email

HIGH-profile Winter Olympian and long-time peninsula resident Belle Brockhoff is ready to go above and beyond to help turn the tide against discrimination.

The Olympic snowboarder, who grew up on her family’s estate in Dromana, was last week appointed a beyondblue ambassador and said she plans to use her new position to highlight the issue of homophobia.

Brockhoff was also the only openly gay member of the Australian team at the Sochi Winter Olympics earlier this year and spoke out against Russia’s anti-gay laws.

Not only is Brockhoff proud to be gay, the 21-year-old has also shared her story of depression and anxiety, and of seeking support, in the hope of inspiring others to reach out when they are struggling.

Beyondblue acting CEO Dr Brian Graetz said Brockhoff had shown she shares the organisation’s passion for taking a stand against discrimination in all its forms and that her courage was an inspiration to all lesbian, gay, bisexual, transgender and intersex people.

“Homophobia is never acceptable, and Belle has shown courage in speaking out in difficult circumstances,” Dr Graetz said.

“Homophobia, like any form of discrimination, can cause long-term stress, which can lead to depression and anxiety.”

He said research had shown that lesbian, gay, bisexual, transgender and intersex people were at least three times more likely to try to take their own lives.

Brockhoff said she first experienced the symptoms of depression and anxiety when she was 16 when she didn’t have confidence in herself, felt unhappy most days of the week and began to self-harm.

She had her first discussion about her mental health with a GP when she accompanied her mother to a doctor’s appointment and was encouraged afterwards to have a chat with the doctor about why she was often feeling down.

“The doctor diagnosed me with depression and referred me to see a psychiatrist, but I refused to do so because I felt that meant there was something wrong with me,” Brockhoff explained.
“I didn’t know then just how common depression was, so I felt like a freak.”

She said she hit her lowest point two years later in her final year of school, when she began experiencing increasingly angry outbursts over little things and felt like she was a burden to people around her.

“That was when I decided to see a psychologist,” she said. “I saw her a few times and she helped me become more aware of my thoughts that led to particular feelings.

“In the last two years, I’ve also been working with a sports psychologist who is aware of my condition. Seeking this support has made me feel much better. “Now when I’m down, I try to surround myself with positive and happy people, or talk to my mum and dad or my sister.

“I also find going for walks by myself or hanging out with a good friend helps if I’m bummed about a result during competitions.”

Dr Graetz said when people share their story of depression or anxiety, it helped break down stigma around these conditions. “Belle’s story sends a powerful message, particularly to young LGBTI people, that depression and anxiety are common conditions and having a mental health issue is not a sign of weakness. It takes courage to accept that you need help when you are struggling,” he said.

Brockhoff encouraged anyone who may be having a tough time to speak up and reach out for support.

“There is a lot of support out there from the people who care about you and organisations like beyondblue. You are worthwhile and there is hope,” she said.

Anyone having a tough time can contact trained mental health counsellors at the beyondblue Support Service on 1300 22 4636 or via www.beyondblue.org.au/get-support for online chat or email responses.