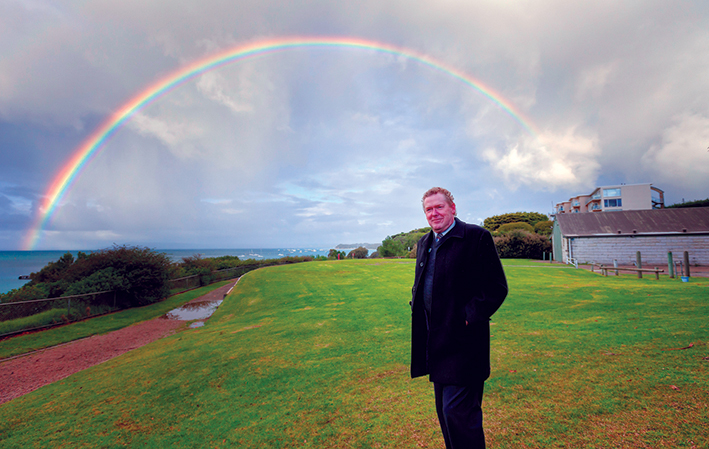 Clifftop scramble: While Mornington Peninsula Shire sees a pot of gold in leasing out the former Southern Peninsula Rescue Squad’s headquarters at Sorrento Park others, like Sorrento-Portsea Chamber of Commerce vice-president Marc Clavin, think it should have a “community” use. Picture: Yanni
Share
Facebook Twitter LinkedIn Pinterest Email

CLAIMS of a lack of transparency are being made over plans to lease and redevelop the former Southern Peninsula Rescue Service building in Sorrento.

Mornington Peninsula Shire had called for expressions-of-interest for the commercial or community use of the 857 square metre site at 4 Hotham Rd, which operated as an ambulance station and helicopter pad since 1987.

Tenders closed on 12 June and a shortlist of preferred occupants will go to the special purposes committee on Monday week.

It is believed the likely tenant is a peninsula wedding reception operator.

However, this could not be confirmed by The News, nor details of the length of the lease, although terms of more than 25 years are not uncommon.

The vice president of Sorrento-Portsea Chamber of Commerce, pharmacist Marc Clavin, said the elevated site adjacent to parkland and with north-facing views over Port Phillip should be reserved for community use, such as art groups, sea scouts or walking groups, rather than leased to a commercial operator.

“There’s a wave of community discontent over this. We are concerned at the lack of transparency in the leasing process,” he said.

“We are concerned that if the site is handed over to a commercial operator to run as tea rooms, a cafe, or for wedding receptions, then that is another piece of Sorrento Park gone.

“We’d like to see the land go back to the park.”

The shire’s special purposes committee agreed in October that the existing “modest” building could be refurbished, providing a “benefit” to ratepayers and income to the council.

The Crown Land status of the site and planning scheme rules allow for a range of development options. Also, the Victorian Coastal Strategy encourages re-use of existing buildings on the coast.

Proposals for a cafe or restaurant, clubrooms, art gallery, recreation-focused hire shop or other tourism activities are regarded as being suitable.

In report council in October property valuations manager Yasmin Woods recommended a broad based expressions of interest campaign under which the best proposal would deliver commercial and community benefits.

She said a successful proposal should be based on “adaptive re-use” of the existing building allowing it to fit in with the local environment, and be sympathetic to its location next to parkland and coast.

The council voted to accept the early termination of the lease with Southern Peninsula Rescue Squad – which no longer had a helicopter and had moved to Blairgowrie marina – and to call for expressions of interest from a potential new operator.

The conditions would include maximising community benefit, integrating the development with parkland and coast, using sustainability principles and ensuring a reasonable financial return for ratepayers.

However, the two Nepean Ward councillors – Tim Rodgers and Hugh Fraser – did not attend the October meeting.

Cr Rodgers Last week agreed with Mr Clavin that “the community needs to be brought on board” before the site is offered to a new operator.

“The council has decided on the expressions of interest campaign and that’s fine, but we need to get the community on board as well,” he said. “I’m not sure that the black and white scenario is best. This is an iconic site that would be suitable for all kinds of uses – some community and some commercial.”

Cr Rodgers said he would not know details of any applicants or leasing details until a special purposes committee meeting on 21 July.

“The problem, as I see it, is that we need a more open discussion as to what is best for the site,” he said. “This is a one-off opportunity for a number of reasons and it has many possible uses; it has views to die for.

“The question is: should it be open space, a venue for the arts, or even a library. Our job is to decide what’s best but we need to get the community on board as well.”

Mr Clavin said there was a “wave of discontent” among Sorrento locals now that the potential ‘loss’ of the site was becoming known. He said the chamber and other community groups had been “unaware” of the planned re-leasing.

“We are certainly concerned at the way this is being handled and that the site will be lost to the community forever. If it is leased out privately it will never come back to the community.

“Tenders have already closed and yet 99 per cent of locals didn’t even know about it.”