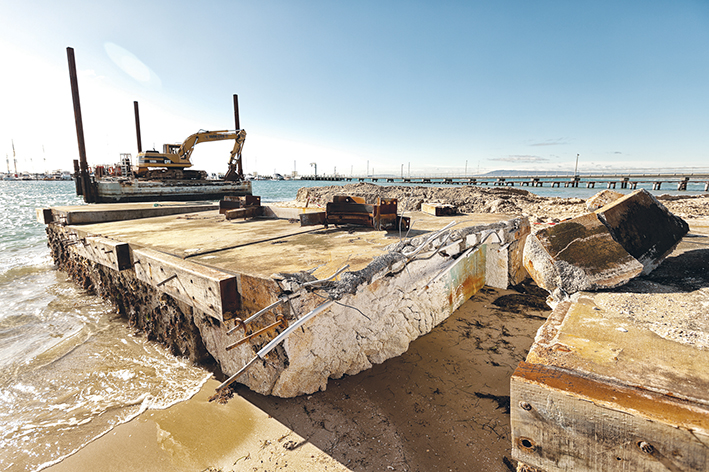 BLAIRGOWRIE Yacht Squadron is playing down the effects of storm damage on its marina – despite the beach being littered with polystyrene beads broken off floating wave attenuators.

The attenuators have now been dragged onto the beach.

Over the past few weeks high winds and pounding waves have broken up the concrete and polystyrene attenuators which act as a floating breakwater designed to reduce waves entering the marina.

General manager Amanda Jacobs said the wild weather had placed some of the attenuators “under distress” forcing the club to hire contractors to remove them.

It is the second time in less than a year that lumps of polystyrene foam and the much smaller beads have littered the beach.

Ms Jacobs said this latest storm had left “not much rubbish – but some polystyrene” and that the club had mobilised members for a “daily clean-up vigil”.

“We came out of it well,” she said. “Blairgowrie was one of the least affected clubs in this area in what can be described as emergency conditions.”

Ms Jacobs said a remaining steel barrier would protect boats in the marina, which is about to more than double in size, with the number of wet berths increasing from 119 to 280.

The existing wave screen will be extended 151 metres to the west and 75 metres angled to the shore with the 75 metre wave screen west of the expanded boat harbour.

A report to the Mornington Peninsula Shire in March 2013 said the extended marina “will have minimal impact on the marine environment” and “enhanced boating safety for berth owners and for visiting yachts”.

Councillors were told that the marina, built in 2001, had “demonstrated a net community benefit to this part of the bay, not only in relation to boating activities, but the broad range of community use and enjoyment of the jetty and water environs and the adjacent foreshore”.

Ms Jacobs said “better engineering solutions” may be available in the new works rather than using the foam filled attenuators, which have broken up in previous storms.

Last August, lumps of polystyrene broke loose from parts of the marina after a series of storms, leaving lumps and balls of the white plastic strewn along the beach. Ms Jacobs, at that time, said she was confident the rest of the attenuator was “pretty secure”.

“The other panels are being checked daily,” she said. The squadron’s tractor and volunteers collected the plastic from the beach.

In October 2009, parts of the floating attenuator also started to break up after being battered by winter and autumn storms. Polystyrene balls and larger pieces spread as far north as Safety Beach, necessitating a large clean-up.