Quest for shell far from a Longshot 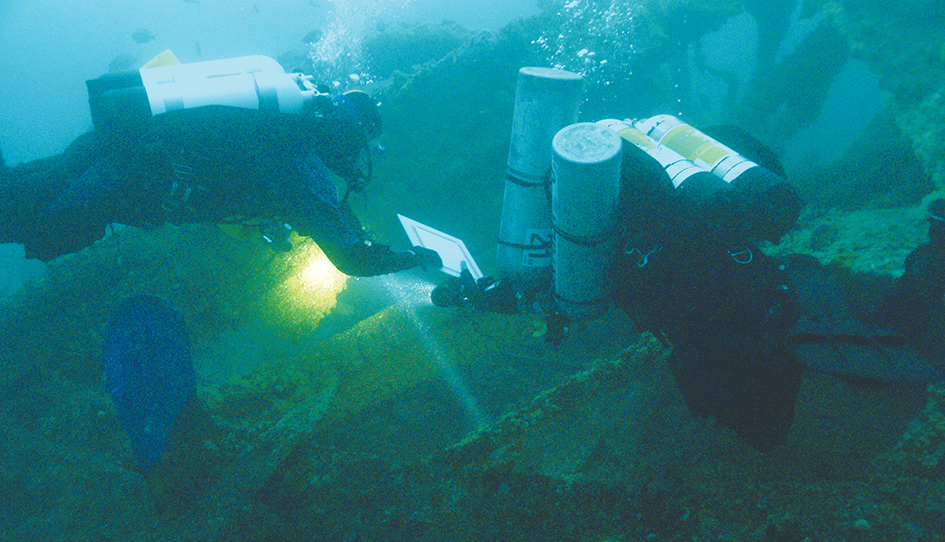 SHIPWRECK recovery experts are increasingly confident they will be able to locate the shell fired from a Fort Nepean artillery gun in 1914 marking the first shot of the British Empire in World War I thanks to the emergence of previously unknown details from the historic event.

While the mission to locate the shell from the murky depths of Port Phillip has been dubbed Project Longshot in reference to the “needle-in-a-haystack” nature of the challenge, dive experts say more precise details from the day the shot was fired one hundred years ago has helped them narrow down the search area.

Project Longshot team leader Mark Ryan, the founder of Australia’s most successful shipwreck discovery team, Southern Ocean Exploration, said the emergence of historical records and anecdotes from 1914 had enabled them to piece together an accurate picture of the precise direction and trajectory the shot was fired.

And critically, it also emerged that the shell fired across the bow of the Pfalz was unique and therefore would be easy to identify among the hundreds of other shells believed to have been fired or dumped into the bay.

However, he admitted the mission would still be challenging, especially given the tight timeframe they had set themselves, with the goal of recovering the shell before next year’s Anzac Day centenary commemorations.

“It will be a difficult mission given the ferocity of the tides in this area and a century of constant dredging, not to mention that locating a six-inch shell in Port Phillip Bay will be a needle-in-a- haystack job,” he said.

“However, we have sourced specialist sonar equipment; a magnetometer that the US Navy is using in Pearl Harbour to locate unexploded ordinance from the Japanese attack in 1942. This equipment is capable of finding a .22 shell under six feet of sand.”

Mr Ryan said the project was entirely self-funded, with the Southern Ocean Exploration team having spent thousands dollars from their own revenue to finance the mission, as well as providing all the resources needed for the search including divers, boats and researchers.

Whitewater Documentaries journalist Terry Cantwell, who is filming the search effort for a documentary film, said the story of the first shot was a compelling and integral chapter in Australia’s history.

He revealed research efforts were providing more and more fascinating details of the event, which were not only filling out the narrative but also helping refine the search itself.

“This is one of the most exciting projects that we’ve undertaken to date – to document the discovery of the shot that announced WW1 to the world,” he said.

“We have been amazed by the enormous community interest in this project; from ex-servicemen to school kids, it seems everyone wants this to happen.”

He said Project Longshot had begun last September when he and Mr Ryan heard Ted Baillieu talking on breakfast radio about “how wonderful it would be to find the first shot of World War I”.

“Soon after this, we spoke to Mr Baillieu and he told us about some new documents that he had recently received, which cast new light on the events on Port Phillip Bay on August 5, 1914,” Mr Cantwell said.

“He put us in touch with historian Keith Quinton, who had recently written the definitive account of the day – Stop the Pfalz, a highly accurate and intensively researched work, which painstakingly examines the Pfalz’ movements, the gun position and the probably trajectory of the shell.”

The information gave them more confidence in being able to find the shell, especially details of the precise nature of the shell.

“It was a heave-to shell – a warning shot – and wasn’t equipped with a charge, therefore it would not have exploded,” Mr Cantwell said.

“Secondly the area where the shell was fired is not a common area where practice rounds were fired.

Thirdly the shell will have distinct markings on its rifling band.

“We will probably find plenty of shells – as many were dumped in the area after the closure of the South Channel Fort after World War II – but the one we are looking for will be quite distinct.”

Support for the mission continues to grow, Mr Cantwell said, incluing from Mount Eliza Secondary College students and their families, who are building replica shells for fund raising, running a social media campaign and helping with promotions.

Other supporters include the The Ranelagh Club, AquaPower Marine (Volvo-Penta) in Seaford, which has donated a new Whittley S22 boat to use in the search, Black Dog Enterprises, IANTD Australia, Shearwater Research, Val Morgan Cinema Networks and “many other individuals and community groups”.

“People would really like this to happen,” Mr Cantwell said.

“After all of this work, we may not find the shell – hence the name Longshot – but we feel it is worth the effort to find what is arguably one of Australia’s most significant historical artefacts.